Broken World #1 Reveals A World We Want More Of 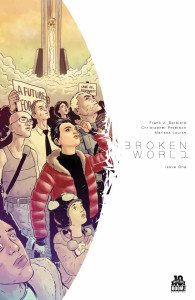 The premise behind Broken World isn’t exactly earth shattering (terrible pun totally intended), but the immediacy of the extinction event – an asteroid hitting Earth in two days – makes the story compelling. Without giving away too much, the world is preparing for the disaster by sending people up to space in elevators to begin searching for a new world. Those deemed unworthy by the government are going to be left behind to their fate.

With a meteor days away from causing an extinction-level event on Earth, time is running out for Elena Marlowe. While most of the planet’s population and her family were approved by the government to escape on one of the giant spaceships headed to another planet, her application was denied due to her mysterious past. With the meteor fast approaching, Elena tries desperately to find a way to fake her way onto the last ship or else be left behind to die with the rest of Earth’s rejected denizens.

When readers are introduced to Elena Marlowe, she’s having her papers forged. How she even knows a forger ties into the mysterious past that put her into this predicament in the first place. The forger is very blasé about the entire thing as we get a quick info dump on what’s happening 48 hours before the extinction of man.

This is followed quickly by an info dump on The Children of the Revelation cult, which believes the meteor is a sign that humanity should take itself out of the equation, courtesy of Elena’s students at the local university. She’s their professor and, ignoring the fact that there are only five students left to show up for class, it’s almost a normal community college experience – rife with debate.

What follows that is a peek into Elena’s home life with her young son and husband, who works for the company sending people into space. Their interactions almost make it seem as if it’s not the end of the world, though there are frayed edges once Elena’s son is safely tucked away for bed.

The beginnings of the issue are very dialogue heavy – sometimes with more than half the panel being overtaken by speech bubbles – and this almost feels like the zero issue before a series actually starts, but that doesn’t distract from the intriguing storyline being built. If anything, it creates a solid foundation for this four issue miniseries to build off of. We know what happened to lead up to that cliffhanger at the end. The question that remains is what happens now?

The series gives me a Children of Men vibe. The sense of hopelessness stems from two different places, but they both showcase some of the same human reactions to it. Likewise, both deal with government intervention and civil unrest in the populous as a whole. I could guess the ending before it happened, but that didn’t make me any less interested in finding out what happens next.

The art is muted towards at the beginning of the issue, leaving fewer distractions from the dialogue being delivered. As the stakes raise and there is less to discuss – it’s a time for action on Elena’s part – the art gets bolder and brighter with heavy reds and blues. It’s well done and matches the tone quite nicely.

Pick up Broken World issue #1 today and let us know what you think of the series!