The Insult explores the invisible scars left by war and the power, for good or bad, of words. If you want a peek into the beautiful and pained lives of a country, watch this film and think on the message it is representing. 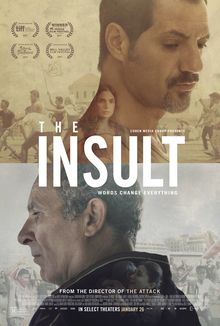 Rating:
The Insult explores the invisible scars left by war and the power, for good or bad, of words.

This foreign language film from Lebanon explores the dynamics of culture, history, war, and words through a courtroom drama. It holds to a simple storyline, a Palestinian man insults a Lebanese man with an eventual escalation to physical violence.

The court case the follows, however, might seem particularly foreign to American viewers. The idea that swearing at a man makes one guilty before a court, that one’s words can have such an impact that, potentially, words can be seen as much a threat as physical violence, might seem improbable.

But that’s what makes this film so intriguing. It is so uniquely Arab, so uniquely Lebanese. In Arabic, words are a poetry and a dance. And insults or curses are not to be taken lightly. Further, the complexity of the history of the region, which American viewers are likely to be unaware of, is such that words have even more power and one’s identity can be determined simply by the way one speaks.

This film is steeped in the history of Lebanon (if you want to know a little about that particular conflict, Doueiri’s film West Beirut might at least demonstrate the immediate human consequence of it), the Civil War, and the conflict with the Palestinian Liberation Organization (PLO). A simple court case quickly draws national attention as the two defendants, Tony Hanna (played by Adel Karam), the Lebanese man, and Yasser Abdallah Sallameh (played by Kamel El Basha), the Palestinian man, refuse to come to an agreement on the matter.

Ultimately, the court must decide if the curse of Yasser justifies the racial response of Tony, which led to the physical altercation.

Again, this concept may seem so foreign. Some reviews have complained that there is little justification for the surly nature of Tony. However, again, with a little knowledge of the catastrophic and traumatizing effects of the war and the internal conflict between Lebanese and Palestinian, one can actually find some empathy for this man. And on the opposite side of that, Yasser is no less honorable than his opponent, keeping some of the words used by Tony secret, so as not to incite more conflict on the matter.

Ultimately this film has a message, that differences should not divide us. But also that we cannot ignore the history behind us. It should not guide our opinions of those we interact with, but it should inform our interactions, for one never knows the pain or history of an individual.

This film is a poignant look at a country that many in the West know little about, or only know what media, such as Homeland‘s portrayal of the country, represents. If you want a peek into the beautiful and pained lives of a country, watch this film and think on the message it is representing. Maybe, just maybe, you’ll learn to be more open-minded, more considerate, of others.

The Insult has been nominated for an Academy Award in the Best Foreign Language Film category.