A Silent Voice: An Exquisitely Beautiful Tale of Forgiveness 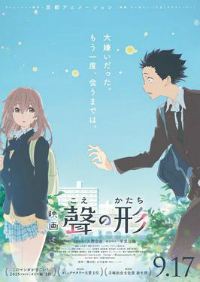 Kyoto Animation set out to break hearts when it released Koe No Katachi or A Silent Voice on September 17, 2016 in Japan. On the surface, the film painfully depicts the terror of bullying and the deep wounds left. In bittersweet fashion, it explores themes of redemption, forgiveness and sympathy. It handles the topic of being deaf, but does so in such a way as not to make it an impairment. Instead, the focus lies on miscommunication and misunderstanding, as well as the loneliness that might come from it.

Reiko Yoshida adapted the film from a manga series of the same name by Yoshitoki Ooima. Naoko Yamada, known for K-On! and K-On! The Movie, directed the film. Yoshida’s past works include the popular D. Gray-man, Digimon, and Gad Guard (one of my lesser known favorites). The film’s story speaks for itself.

The Sum of Its Parts

Shoya Ishida was a bully, one of the worst kinds, who played apathetic ringleader to a group of elementary school students who tortured an innocent classmate day by day. Under his guidance, his friends bullied the deaf Shoko Nishimiya for no reason other than the slight inconvenience that her particular needs caused them.

Their awful shenanigans eventually caused her to switch to a different school and the blame quickly fell to Ishida as the sole perpetrator. No sooner than her leaving did his friends turn on him and designate him the new target of their persecution. Ishida became the social equivalent of a leper, suffering physical and emotional damage, into his high school years.

Having become a different person, he happens upon a chance encounter with Nishimiya and personally pledges to atone for his past. It is here where the central plot of the film begins.

The film has some serious layers, we’re talking onions here, people! There’s drama in spades and the suffering we see from various perspectives lends the film a robust profile.

Mere minutes in, the film promises to keep you entrenched in your feels. It scores brownie points for registering itself as a unique, unorthodox story. While much of the story centers itself on redemption, a great deal still covers Nishimiya’s struggles as a deaf person. The film refuses to shy away from her struggles, big or little.

The soundtrack is simple and minimalistic, but still a perfect fit. It plays second fiddle to the story and animation in a way that supports both well. Speaking of animation, we’re treated to a delicate, dreamy style. Together, they’re almost criminal.

It’s alarmingly easy to fathom how A Silent Voice captivated enough viewers to win two awards and earn a nomination for another. The two awards won were the best film award in the Feature film competition and the best screenplay/original story in the film category, both of the Tokyo Anime Award.

While the film was so stunning it hurt, it lacked complete perfection, as most things in existence do. Many of the characters possessed great depth or added an element to the story. However, I could mention a character or two who failed to make their presence purposeful. So while most of the character work was splendid, there remained slight room for improvement.

The film will be released in theaters across the U.S. on October 20, 2017. My recommendation? Rush out to see it any way you can. I would expect limited showings, but tickets will surely be available beforehand online. I’ve yet to see any available tickets online, but Fathom would probably be the place to look in the near future.

The film was perfect in so many ways and the few flaws are too microscopic to make a dent. Don’t be surprised if you’re left in tears by the closing credits.