Rockstar Book Tours: Sparked – the Twilight we always wanted but never thought to ask for! 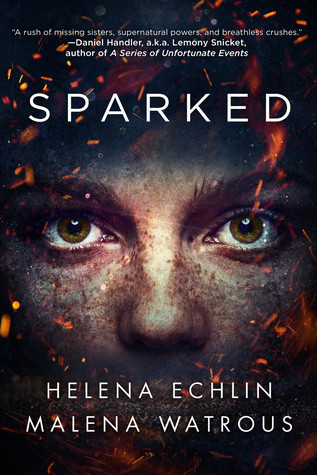 Sparked is like the Twilight we all wanted but never thought to ask for.

The narrative follows Laurel Goodwin, a young teen searching for her missing sister, Ivy. Along the way, she meets the mysterious Jasper, who has the power to start fires with his eyes. As Laurel’s attraction to Jasper blossoms, Ivy’s situation worsens. Ivy has been kidnapped in a plot to revive an ancient spirit of evil, and she needs three people with powers to set her free.

Chapters switch off between the perspective of Laurel, Ivy, and the school’s two mean girls, Mei and Peyton.

Originally, I was surprised that we weren’t reading the entire book from Laurel’s perspective, but the vantage point switches ended up working very well. I got the necessary background from each character to drive the story forward without losing the thread of the Ivy/Laurel mystery. Also, the narrator shifts weren’t nearly as jarring as in other multi-perspective books, and I loved that there weren’t unnecessary, sensationalist cliffhangers before each transition.

The writing has the same magnetic quality of Twilight without some of Meyer’s clunkier phrases. Echlin and Watrous capture the essence of a teenage perspective without feeling overwrought. Each scene dovetails nicely into the next, and there’s plenty of action and suspense to keep readers turning the pages at a rapid clip.

Sparked is a fresh take on a supernatural adventure, with a light touch of romance. With a superbly built supernatural universe and realistic, multidimensional characters, there’s plenty of room for a sequel, and I’m sure readers will be clamoring for more.

As part of the giveaway, Rockstar Book Tours is giving away three copies of Sparked! Unfortunately, the giveaway is open to US addresses only. Enter now!

Fifteen-year-old Laurel Goodwin wakes up to find her older sister Ivy missing from their Airstream trailer in the Oregon redwoods. A recurring nightmare convinces her that Ivy was abducted, but no one takes her dream seriously, including her mom. Laurel, a loner, has to learn to ask for help, and Jasper Blake, a mysterious new kid who shares her love of old books, quickly becomes her ally. Together they find their quiet town holds a deep secret and is the epicenter of a dark prophecy.

Laurel soon learns that her worst enemies, mean girls Peyton Andersen and Mei Rosen, are developing powers that she needs to find and save Ivy. With time running out, Laurel realizes that power doesn’t always take the form that you expect. And once she learns to look beyond her snap judgments, she develops an unexpected gift of her own.

Read a sneak peak of SPARKED! 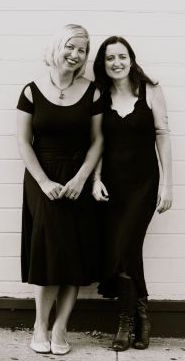 Hello! We are both novelists, but if you’ve ever tried to write anything, you know that writing can be a lonely, angst-filled business. So one night over a cocktail or two, we came up with a solution: write our next book together. Malena already had an idea: a girl’s sister is kidnapped and she has to rely on mean girls with superpowers to get her sister back. We couldn’t resist seeing where that story would take us – a wild ride that includes a loner girl who wants to be a writer and a gorgeous boy who can shoot fire from his eyes but also loves to talk about books. And an ancient Zoroastrian prophecy. And pie shakes. (OK, so maybe we got a little carried away.)

We’ve both published solo novels and had no idea how co-writing would work out, but we pounded out the first draft in a white-hot frenzy of inspiration we called “the Vortex.” One of us would write a scene and send it to the other with a note: “My apartment is a pigsty and I haven’t eaten all day. #inthevortex.” We wrote the book we wanted to read as teenagers: a supernatural thriller with healthy doses of horror and humor. Oh, and of course there’s romance. You have to wait a long time for the only kiss in the book, but isn’t that the case with all the best kisses in books?