Dark Matter canceled after 3 seasons by Syfy, Nerdophiles has learned.

We are so bummed by this news! Dark Matter is based off the comic series by Joseph Mallozzi and Paul Mullie. The show launched on Syfy back in 2015 and aired on Fridays on Syfy. Mallozzi serves as executive producer, writer, and co-creator with Mullie on the show.

The show seemed to be just getting its stride. Last Friday, the season 3 finale was pretty great, and definitely left fans anxiously waiting for a season 4. We can’t confirm why the show was canceled; but we do know that ratings dropped approximately -12% during season 3. This doesn’t seem like a huge loss and has us wondering if there’s more to the story.

Mallozzi took to his blog to confirm the news stating:

“It is with great sadness that I confirm the news. Syfy has cancelled Dark Matter after three seasons. To say that I’m incredibly disappointed would be an understatement. I’ll save my comments and field your questions in a future blog entry. For today, I just want to extend a heartfelt thanks to my amazing crew, my wonderful cast, and to all of you, our incredible fans. You all deserved better.”

Indeed we did, Mallozzi! Thanks to the actors and creators for giving us 3 seasons that I’m sure most will be revisiting this long weekend, or at least I will!

The actors took to Twitter to express their sadness, thoughts, and thanks! 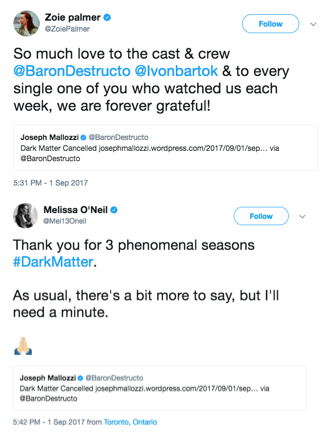 Syfy has confirmed Wynonna Earp and Killjoys will be renewed for another season.