Crunchyroll has a large amount of anime, enough so to have become one of the leading streaming services. Of course, such an achievement is a double edged sword. The huge inventory can be daunting, so let this guide make it easier for you.

10. Restaurant to Another World

What’s it about? A restaurant that teleports to different worlds once a week, serving a wide range of clientele.

Some earlier series in the same genre would include Toriko, or Shokugeki No Soma. So if you enjoyed either of those, you’ll certainly enjoy this entry as well.

What’s it about? Demons who steal time from innocents and the time warriors who battle them.

What can you expect? Nice fight scenes, themes of accepting time/death and frivolous comedic relief.

While a first glance it definitely conjures up memories of past hits, what earns Chronos Ruler a spot on this list is the interesting dynamic between the lead characters. No spoilers here, but suffice it to say that the relationship is delightfully uncommon. Of course, there’s so much more to the series, but this element is sure to pull you in for starters.

8. Hina Logi: From Luck and Logic

What’s it about? A group of magic girls who attend a school to better control their magic, in a world where they have become essentially obsolete.

What can you expect? Transformation sequences, cute girls, and magic.

Magic girls aren’t new and there will surely be more to come. Still, who doesn’t like a good old transformation sequence every now and then? This series features some great ones. 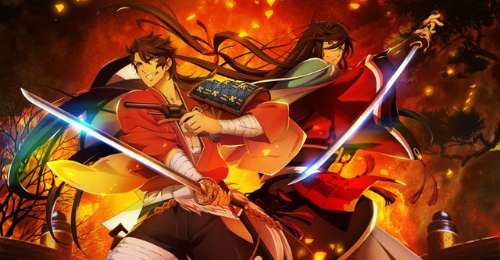 What’s it about? Soldiers who protect the time-space continuum from those would attempt to alter it.

What can you expect? Neat fights and your next cosplay costume.

One of the only entries on the list based on a video game, this series originated from Touken Ranbu, a free-to-play browser collectible card game. You thought samurai were cool, try time-traveling samurai equipped with legendary swords. Their only job is to stop evil forces from changing the course of the future and to look cool while doing it.

What’s it about? The thrills and fears of adapting to adulthood.

What can you expect? Light humor, relatable situations.

For anyone who missed the memo about how to be an adult, consider this the training manual. It’s an enjoyable watch mainly for the desire of the protagonist to be a proper adult and her introduction to a mature work environment.

What’s it about? An anthology of different tales of individuals making a deal to send whoever they desire to hell.

What can you expect? Twist endings, dark portrayals of human emotion.

Remember any time you’ve told someone “Go to Hell!”, now imagine if they actually did… forever. This series is the fourth in a series of anthologies centered on those people, or rather the situations in which they find themselves booted to hell.

What’s it about? The adventures of Boruto, son of Naruto, and the other children of the protagonists of the original Naruto series.

What can you expect? Cameos to make the world go ’round.

Naruto fans, beware. Boruto is a very different creature than the cult classic that’s earned a seat next to legends such as Dragon Ball Z. So enter with caution. Still, seeing the offspring of characters from Naruto is a treat no fan would want to miss and even the smaller moments shared between the children won’t go unnoticed.

What’s it about? Different tales of young love, each beginning with a confession of sorts.

What can you expect? Nostalgia, heartwarming love, quirky tales of romance.

I don’t know about you, but it can grow pretty tiresome waiting for the fated lovers across the glorious world of anime to confess their love. With Tsuredere Children, you’re saved all of that unnecessary meandering. Witness young love and all the awkward situations that come with it.

What’s it about? An invitation to join the gamers club from the most popular girl at school, given to the school’s loner.

Rather than being about the invitation itself, the show is more about the shenanigans that result from it. The characters develop dramatically from episode to episode and your opinions of them will change by the minute. The show relishes any chance to poke fun at itself or its many pieces. There’s not one dull character.

What’s it about? A young boy without powers in a power-ridden world, striving to be a superhero regardless of his unfortunate defect.

Now although this series isn’t new to Crunchyroll this summer, it’s only got one completed season under its belt. The second season is currently airing. This show breathes inspiration, just through the protagonist’s struggles alone, but each of the characters have issues of their own. It’s more than just another compilation of fighting scenes and filler. It’s an exploration of what it means to be a hero, in a world where most people have a “quirk” of some sort.

But don’t stop here. Crunchyroll has an extensive selection of anime, as well as one of the largest simulcast inventories. Once you’re done here, take a look at Crunchyroll’s choices. And be sure to tell us what’s in your own top 10!