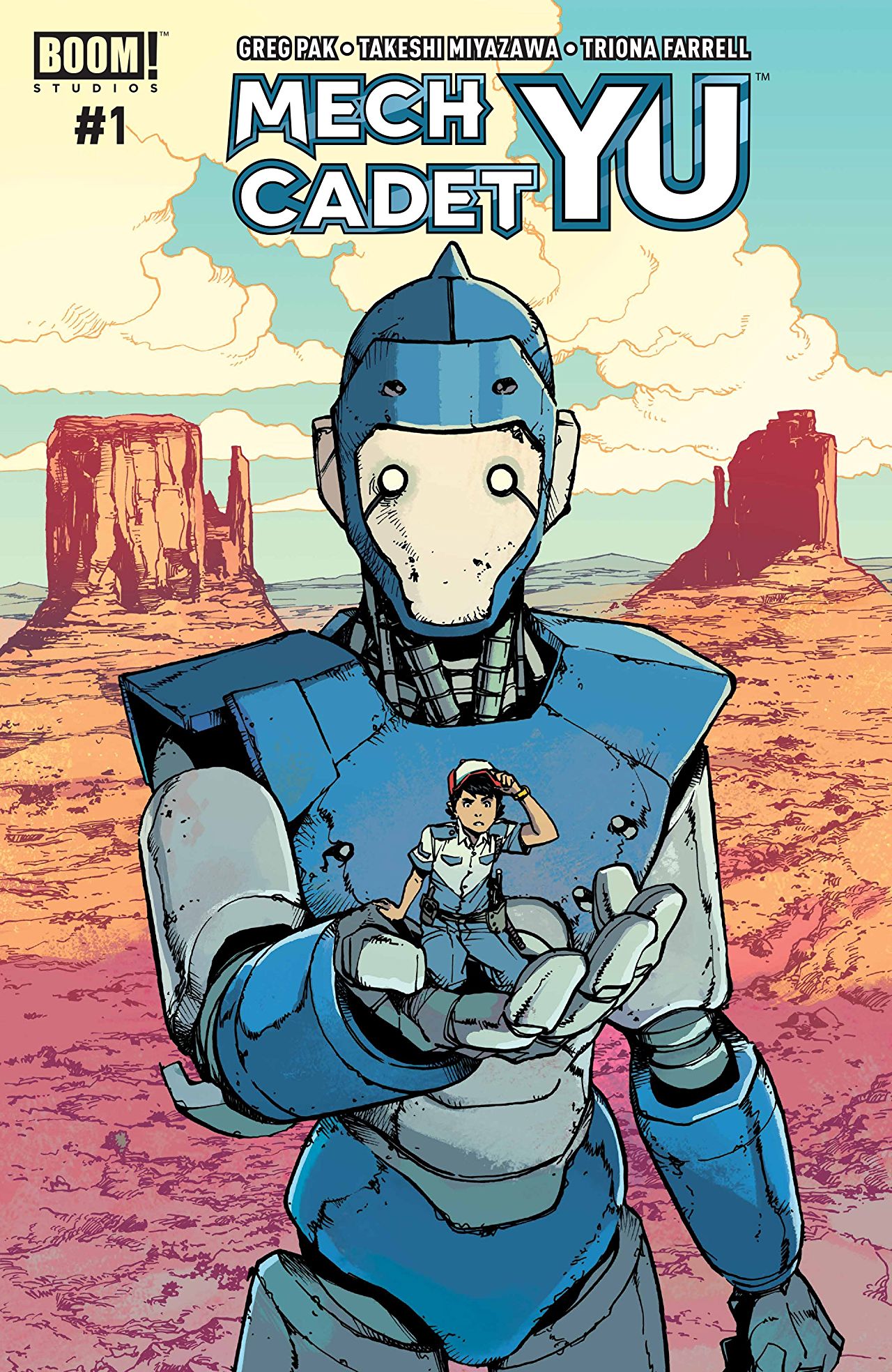 
Rating:
What has always fascinated me about the Mecha genre is how flexible it is. In the same way as superheroes, stories of giant robots can include everything from the whimsical heroics of Big Hero 6 to the space-opera adventures of Robotech to the teen angst to the existential angst and mystifying religious allusions of Neon Genesis Evangelion to the grim stories of love and war in the Mobil Suit Gundam franchise to the apocalyptic punch outs of Pacific Rim.

It’s a genre that welcomes experimentation, mixing and matching the best of superheroics, military fiction, and sci-fi into something with a larger appeal than any one genre offers alone.

Mech Cadet Yu is, more than anything, a combination of the teen conflicts and human-robot cooperation of Neon Genesis Evangelion with the childlike wonder and Spielbergian  sense of danger of The Iron Giant. The first issue introduces Stanford, a teen assigned to work maintenance at an academy for robot mech partners who help robots from space battle a mysterious alien threat.

Stanford longs to be a hero and struggles with the ordinary life he feels has been forced on him. That all changes when, by chance, he meets and teams up with a newly arrived robot, leaving the cruel Cadet Olivetti without a robotic partner.

It’s a setup rife with anime-inspired drama filtered through writer Greg Pak’s unique approach to comics and characterization. He’s always had an unparalleled ability to infuse characters with heart and a relatable pathos in a handful of pages. Stanford’s struggle to find some shred of agency in his life is one that many will be able to find relatable and the moment when he connects with a robot is one of is one of general, jubilant excitement.

This is a comic that consistently maintains that childlike balance between despair and whimsy, featuring an art style with big expressive faces and manga influences that don’t sacrifice scale for emotion. It’s a sweet spot Takeshi Miyazawa has been proven time and time again with work on Ms. Marvel, Runaways, Spider-Man and Mary Jane and more unconventional superhero comics.

He’s facing a challenge rare in many comics where a particular sense of scale is necessary. Making sure that the robots loom over every scene they’re in is a challenge, particularly when one is also required to show the fear, cautiousness, apprehension, and joy they inspire in the humans around them. Miyazawa pulls it off with aplomb here.

Not everything works quite as well though. While it was probably necessary to some degree, there’s an awful lot of exposition in the first few and last few pages of the issue, mostly delivered by a single character. It’s an unexciting way to open and close the issue and left me wishing the story would have ended a few pages earlier at the actual climax of the issue.

Still, what’s setup here is fun and smart, playing off manga and American cinema alike in a way that will have familiar fans paying attention and younger ones enthralled.