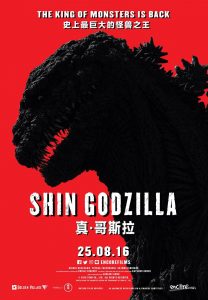 What happens when the King of Monsters emerges from the depths of the sea? That is precisely what Shin Godzilla looks to answer as it breaks ground on a new beginning for everyone’s favorite radioactive reptile. This is the 31st film in the Godzilla franchise, and the 29th film production company Toho has personally overseen.

What has historically been a hilariously wonderful attempt at a monster movie was given a face lift in Shin Godzilla as the writers explored what a modern response to this ancient threat would be. In what might be the best Godzilla movie yet, and light years ahead of the Hollywood productions, Shin Godzilla explored the human condition, nationalism, and the difficult choices that positions of power require.

Masterfully shot, with a blend of live action and computer graphics, Shin Godzilla enchanted audiences with its large views and attention to detail. Every moment of the movie fit precisely where it needed to, and each shot draws the audience further into the world the characters inhabit.

What specifically caught my eye was how well the computer created sequences were barely distinguishable from their surrounding area. It was unlike anything I had ever seen in mainstream Hollywood film, and provided another level of authenticity often missing from modern science fiction.

After Godzilla emerged from the depths, he sent the world into a spiral, and at the end of the day it was a group of geeks, nerds, misfits, and outlaws that came together to save the day. In the midst of the turmoil, audiences were allowed a peek into what one can only assume was a semi-realistic depiction of Japanese bureaucracy, and demonstrated the importance of rising above the circumstances to make the hard choices. Especially in a crisis, there may not be committee approval, and at times good people have to make very costly decisions in order to preserve what they believe to be the greater good.

Underneath all of the monster mayhem that Godzilla films are known for was a heartfelt reminder about Japan’s war-filled history. The characters, stuck with a system that was anything but functional, had to reflect on their country’s history and decide how they would proceed.

When the United States convinced the Japanese government that they needed to drop a nuke in order to kill Godzilla, everyone there was reminded of the World War II bombing of Hiroshima and Nagasaki and fought in order to not have to relive the terror. Godzilla might have been the conventional monster, but there’s nothing like a crisis to remind everyone that humans can be even worse than monsters.

With every beat simultaneously calling back to the original Godzilla films while forging a path into a new future for the franchise, Shin Godzilla delighted audiences and brought with it not only mayhem, but a lesson in humanity. To find a film that can so perfectly fit the science fiction genre is rare these days, but Shin Godzilla fits the ticket.

If you want to catch Shin Godzilla during its limited US release, check out THE WEBSITE and see if it is playing at a theater near you. Thank you to Funimation for providing VIP access to the premiere screening.