Atomic Blonde: We’ve Got Some Questions About the Ending 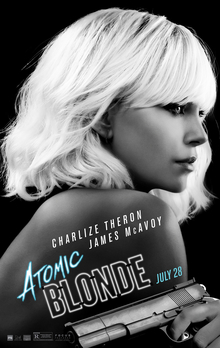 Atomic Blonde showed me that I will happily watch Charlize Theron traipse around in high heeled boots kicking Soviet ass to a boppin’ 80’s soundtrack any day of the goddamn week.

I loved this movie. It felt like a video game- stylized with neon lights, gritty violence, and enough cigarette smoke to kill the surgeon general. I want to go grab some peroxide and take up kickboxing.

Charlize Theron shimmers in this atmospheric action movie, but don’t try to delve beneath the film’s candy-apple exterior for a fulfilling plot.

Atomic Blonde tells the story of the espionage around (but not touching) the fall of the Berlin Wall in 1989. It’s a pretty cool premise – we’re peering behind the Iron Curtain while it falls, but our characters have nothing to do with its collapse.

Instead, Charlize Theron (Lorraine) is sent by MI-6 to retrieve a stolen list containing the names of every spy in the game playing for teams West and East Berlin. That information has been coded into a fancy watch, which was stolen from a CIA/MI-6 (not sure which) spy before he was killed by the Russians.

Cue Charlize Theron. Her mission is to rendezvous with James McAvoy (a hedonistic MI-6 agent living in East Berlin) and retrieve the list.

The story alternates between Charlize telling the suits from admin how the mission went down in a padded recording booth and watching the mission firsthand.

What we discover is that things are not as they seem. Charlize has been charged with a second mission – discover the identity of a double agent (Codename: Satchel) – and trust no one. When she arrives in Berlin, Russians pick her up from the airport and attempt to kill her, leading to a meet-cute with James McAvoy.

After tons of rounds of bugging each other (literally, electronically surveilling each other), Charlize hooks up (literally) with a French spy (Delphine) and the two independently discover that McAvoy appears to be double crossing them. Unbeknownst to them, he has already acquired the hard copy of the list from the Russians.

Although there’s a hard-copy of the list floating around, there’s also a human version – a German officer (Codename: Spyglass) who defected in return for amnesty. He memorized the entire list. Charlize finds this out later in the movie, and tries to keep Spyglass safe while crossing the border.

Unfortunately, her best-laid (and umbrella-laden; thanks to the trailer for spoiling that reveal) plans go awry and James McAvoy shoots Spyglass, and he eventually dies after 15 minutes of fistfights and gunfire later when Russians run Charlize’s car into the river.

Okay, after that fracas, Charlize figures out that James McAvoy is spying on her, James McAvoy kills Delphine, and Charlize ends up killing James McAvoy and taking the watch, leading us back to… the conference room with the administrative agency heads for the BIG reveal.

So after Charlize kills her Russian comrades and gets the list back to the CIA, she rides off into the sunset, leaving the audience more confused than ever.

So now that we’ve been thoroughly spoiled, here are my questions:

1. Why would McAvoy try to kill Charlize by tipping off the Russians when she lands in Berlin? He has no motivation to kill a fellow agent who might be helpful in getting the list. He can kill her later if that’s what he wants! If Charlize is working with the Russians, why are they trying to kill her? They don’t know she’s a double agent until the very end!

2. Why does Charlize want to keep Spyglass alive if the list identifies her as a triple agent? Also, why does McAvoy (and the Russians) want him dead so badly? He’s valuable intelligence that all the players should be fighting to protect (except Charlize) for their own motivations.

3. WHY THE HELL DOES IT MATTER THAT CHARLIZE IS A TRIPLE AGENT? What purpose does that even serve? How does that factor in? What the actual f*ck is this movie?

4. Am I just horribly stupid? Because I left this movie super satisfied with all the visuals and action but confused as hell on the plot.

It’s like a bad Christopher Nolan movie. I wanted to be Incepted, but the deeper I go, the more confused I get. It’s like zooming in further and further on a threadbare blanket – there’s just not a whole helluva lot there and you’ll get lost in the [plot] holes.

12 thoughts on “Atomic Blonde: We’ve Got Some Questions About the Ending”