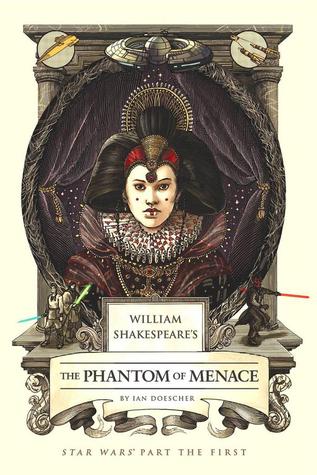 It’s no secret that I love the William Shakespeare’s Star Wars adaptations from Ian Doescher and Quirk Books. The original trilogy box set was featured on two of our holiday gift guides this past Christmas and I’ve rated past entries in the series very highly in their own right. Honestly, they are some of my favorite books to read and review because they are so quirky and fun.

I just really love these books.

So when I say that William Shakespeare’s Star Wars: The Phantom of Menace is perhaps the best one so far, you should take that to heart. I will admit to being a bit biased. Even without the Shakespearian flare, I find The Phantom Menace enjoyable. Say what you will about it but I saw the movie for the first time when I was eleven and it was freakin’ awesome. I’ve been looking forward to Ian Doescher’s version of this film since before he had even finished adapting the original trilogy.

And he absolutely nailed it.

It all comes down to Jar Jar really. Ian Doescher knew from the start that Jar Jar Binks would be a problem and he figured out a way to really change everything. Instead of leaving him the mindless nitwit he appears to be in the movie Doescher recreates him as an educated, radical thinker determined to use the Jedi and the trade conflicts to revolutionize Naboo and bring his people together with their human neighbors. He plays the fool and guides the players toward his ultimate goal with none of them any the wiser. This reinvention of Jar Jar Binks is absolutely inspired. He’s finally a fully fleshed out character in his own right. He’s more than just a joke.

That’s not to say Doescher doesn’t have his fun. One of the many little stylistic choices he makes is to have Jar Jar – when playing the fool – speak one syllable less than a full pentameter. This gimmick joins Yoda’s haiku-styled speak from the original trilogy which I loved so much. Another fun easter egg? Every line spoken by Mace Windu references a Samuel L. Jackson film title. Most of them are so well worked in to the dialogue you don’t even notice at first.  It’s fantastic.

Everything about this book is fantastic.

From the staging choices for Anakin Skywalker’s podracing escapades to the Battle of Naboo to the final duel between Darth Maul, Qui-Gon Jinn and Obi-Wan Kenobi, Ian Doescher just puts so much effort and detail into these books. I could honestly imagine trying to perform these on stage and that’s really part of the magic for me (granted, my vision is a lot different than the illustrations – spectacular as they may be – show).

As much as I loved this adaptation, I’m not just recommending this book to you – I’m recommending all of them. Start with this one or pick up the original trilogy. Just read them. They are so much fun and a must read for anyone who loves Star Wars and likes to laugh about it.

And watch for the Episodes II and III on bookshelves later this year!

A review copy of this title was provided by the publisher in exchange for a fair and honest review. (Spoiler: we loved it.)