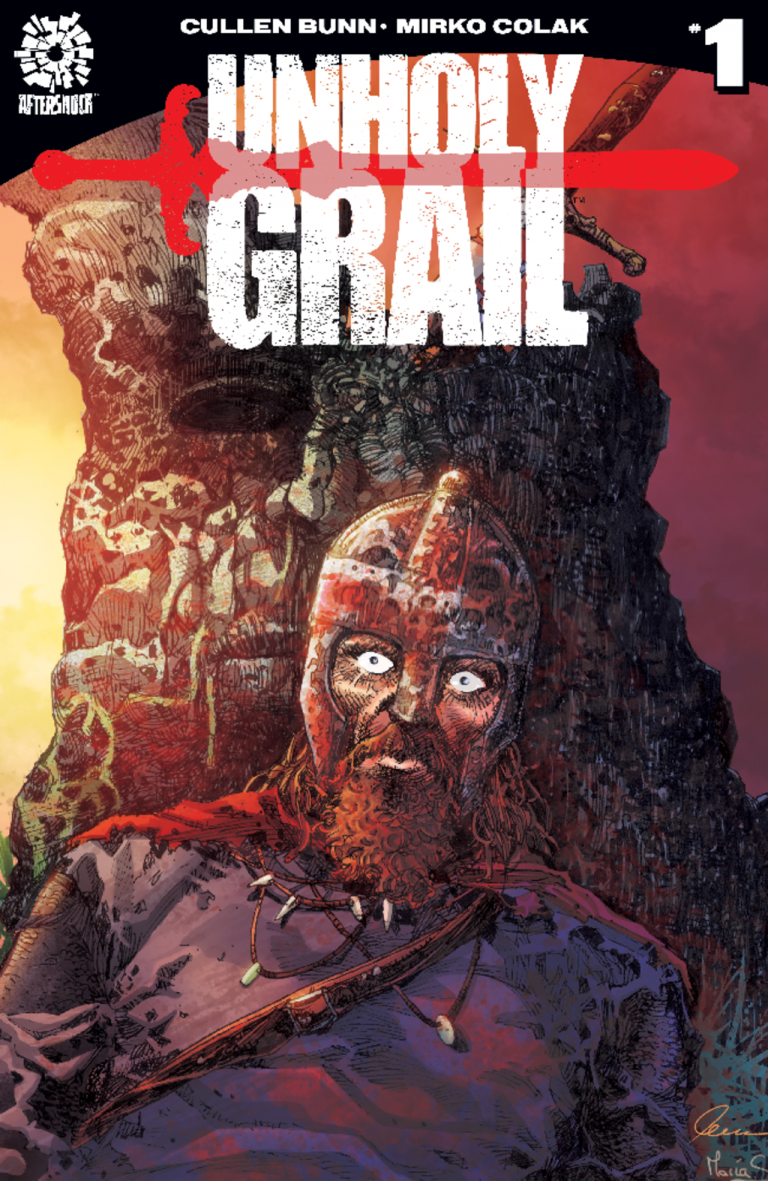 
Rating:
It can be difficult to take a well-known tale and spin it into something that feels fresh and new, but that’s exactly what Cullen Bunn and the creative team accomplish with Unholy Grail #1. It’s no surprise that Bunn has been able to twist a classic legend into his brand of horror, given what he has already accomplished with other titles like Harrow County, which resides in the same vein of fantasy-fairy-tale.

Utilizing flashbacks, readers are introduced to the key players in the story: Percivale, one of the knights of the roundtable, Merlin, and Arthur himself, along with plenty of minor characters, including Arthur’s father, Uther Pendragon. The characterization of Merlin and the explanation given for his behavior was completely unexpected, but brings depth to the story that really underscores the horror aspects of this series.

Percivale and Arthur, in separate vignettes and time periods, are both somewhat unsure warriors – Percivale from a long, perilous journey that kept him from home too long and Arthur’s confidence stripped away from an overbearing advisor. Though, it appears one is punished and one is rewarded for their efforts. It’s certainly a busy first issue, setting up the relationships and giving enough of each character to discern their personality and what might become their motivations throughout the series.

Honestly, if you think you’ve heard every possible variation of Merlin and Arthur and the Holy Grail, then pick up Unholy Grail for the artwork. Mirko Colak utilizes a murky color palette that puts a suitable pall over the story. I last saw his artwork on the pages of Kingsway West and Colak knows exactly how to illustrate the aftermath of battle. It is unflinchingly in the foreground of both the story and the panels, with readers subjected to the gruesome aftermath of battles and sieges.

It’s chaos and crowding, with plenty of dead bodies and broken weaponry, forcing readers to take a moment to parse where the armor ends and the spikes begin. Blood charts Percivale’s path, foreshadowing the end of his journey in the cobbled castle. It’s all oranges and browns while Arthur’s quest to give another blade to the Lady of the Lake is bathed in blues. Equally as detailed, giving anthropomorphic shape to unknowable forces, both sequences are haunting.

All of this is before Colak’s facial expressions are mentioned. Bunn’s writing is beautifully underscored with subtle character work. From hiding Merlin’s face completely to Percivale’s palpable fear, Colak manages to convey so much of the mood and feelings of a character in just a look.

When you thought there wasn’t any more nuance to be had in the mythos of King Arthur, Merlin, and the Knights of the Roundtable, Bunn takes those notions and throws them into a blender to make an all-new supernatural horror smoothie. Accompanied by Colak’s excellent art, Unholy Grail puts a new shine on an old tale that makes me extremely curious to see where this series is headed. After all, I’ve got to see Excalibur…