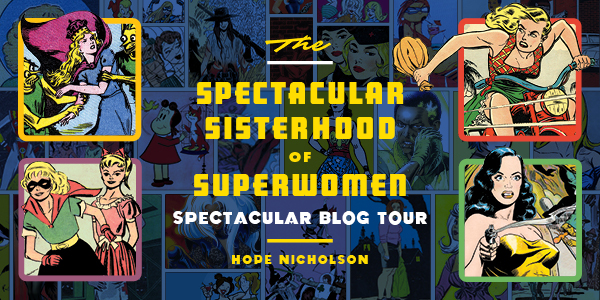 Hope Nicholson’s latest book, The Spectacular Sisterhood of Superwomen, just came out on Tuesday and we pretty much loved it. I mean, who wouldn’t love a book full of awesome, zany female characters pulled from the pages and panels of comics past and present? Nicholson’s book is a lot of fun and she does a great job putting the spotlight on some of the lesser known, but still important, leading (and supporting) ladies of comics. Not only that, she provides readers with a nice little history of not just comic books in general but the upward battle towards meaningful female representation in them.

You can out a lot more about the book over at the Quirk Books website – and we definitely recommend you check it out!

As part of her ‘Spectacular Book Tour’ promoting The Spectacular Sisterhood of Superwomen, she’s written a guest post about some of the real life superwomen who made waves in the comic industry. Take note, folks! And enjoy learning about these five trailblazing female publishers.

As a small press publisher and owner of the company Bedside Press and as a comics historian, the intersection of publishing industry and comics is fascinating to me. I was delighted and thrilled as I went into the rabbit hole of research to consistently see female leaders in publishing companies throughout the decades. These women are dedicated, driven, and were completely committed to pushing innovative boundaries in comic book publishing. They’re an inspiration to everyone who works in comics.

A product of the traditional model of work (that has now since faded!) Helen Honig Meyer worked her way up from a clerk in Dell Publishing to vice-president, to president. A practical and strong-willed woman, Helen is best known for the way she cut through the bullshit at the hearings for comic book delinquency hearings in the 1950s. Rightly pointing out, with some beautifully arranged data, that her books were few in number but accounted for most of the comic industry sales, without any horror at all, she clearly saw no need for the assumption that comics in of themselves were detrimental. Sniffing at the rest of the comics industry that decided to enforce a code of conduct, Helen kept her company doing what it did best – selling good comics. Negotiating deals with top licenses (yes, movie and tv show tie-ins were essential to comics even at the very beginning!) Helen was responsible for one of the most significant and powerful publishers in comic book history – and one that was notable for marketing directly to the all-ages market.

Jenette was a Harvard graduate who immediately launched into the world of publishing, creating her own small press magazine that focused on exposing children to social issues, before moving to Scholastic. She soon became publisher of DC Comics where she helped transition the company into the new economy of direct sales, but not without a fair bit of anger from the majority-male staff. She was a big proponent of increasing creator rights, a result of her disappointment in the lack of royalty sharing at Scholastic. Under her leadership artists and writers shared royalties, creators had more consistent credits for their work, graphic novels were pushed, and eventually the first creator-owned divisions of DC (Vertigo and Milestone) were formed.

A rebellious writer, bookseller, and magical person, cat yronwode was the push in Eclipse comics, an independent publisher in the 1980s with several notable titles. She started as a highly acclaimed comics journalist while freelancing as an editor, for companies such as the underground comics publisher Kitchen Sink. In the early 1980s she joined Eclipse Comics as editor-in-chief where she was responsible for comics that aspired to be more literary and complex than most other comics. The dark superhero morality tale Miracleman by Alan Moore & Neil Gaiman being one of these, along with The Rocketeer. She also helped write and publish the first history of feminism in comics with the history book Women and the Comics co-written with Trina Robbins.

Publishing in Canada is hard. With a sparse population base and increased cost of materials, relatively few comic publishers have been able to be successful in Canada. Any that have must be particularly notable, and Deni Loubert’s work is definitely among them. Starting off in science fiction fandom, Deni was eager to publish her zine Cerebus when she met a cartoonist named Dave Sim. Together they formed the publishing company Aardvark-Vanaheim, whose first project was Sim’s new comic Cerebus, named for Deni’s zine. Deni took the reins of the publishing company, forming printing connections, and distribution relationships with the newly created comic shop market across the country, and into America. Soon, they added new titles to their publisher, such as the gritty crime drama Ms. Tree and the energetic Neil the Horse. When Deni left Aardvark-Vanaheim, many titles followed her to her new company Renegade Press until they closed due to low sales in the late 1980s, along with many other small press publishers.

Starting off in webcomics, Spike was quick to seize on the new platform Kickstarter when it launched, to help push new projects and build her publishing house Iron Circus Comics. With a focus on female-friendly erotica (such as the perennial popular Smut Peddler anthology series), along with an assortment of creator-owned content, Spike has built a solid publishing house that has set the standards for most new small presses. You might not even know it when you launch or fund a Kickstarter but many of the techniques now considered standard have originated from Spike’s early campaigns, starting all the way back in 2009 with Poorcraft,  a guide to frugal living created with artist Diana Nock. Growing from a webcomics publisher with a dedicated fanbase, Spike has become the largest comics publisher in Chicago and representative of the new wave of comic publishers.