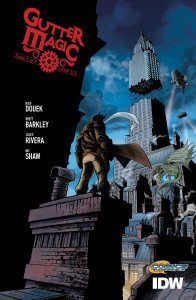 The previously self-published Gutter Magic hits the shelves of your local comics shop today and it’s definitely worth picking up! Last month, we spoke with writer Rich Douek and provided a preview of what readers can look forward to in this gritty, urban fantasy series.

In this series, World War II wasn’t won with your typical warfare strategies – wizards came into the fight on both sides and a hundred years later, New York City is unrecognizable as we know it. A floating building broken in two and self-aware marketplace are just two fantastical artistic visuals readers are treated to. Artist Brett Barkley’s work evokes a rich, bustling city life that does justice to its human and non-human company alike.

Magic especially is given a thoughtfulness within the art that showcases hand gestures and overlapping runes, along with Douek’s spell-casting speech bubbles, lettered by Nic Shaw, adding an extra layer of interest to each panel where magic is in play.

There is a distinctly steampunk feel about the world as well, with our main protagonist sporting a pair of goggles seen on every steampunk cosplayer ever (hopefully they come with a function down the line), and floating blimps in the background. The world built by the creative team is an interesting mix of old and new, rendered bright and busy – like the marketplace – or dark and dangerous – like any of our protagonists many showdowns throughout the first issue thanks to colorist Jules Rivera.

Speaking of our protagonists, Cinder and his goblin best friend, Blacktooth, they are filtered through the lens of one fight after another in the first of four issues in this series. Presented as swashbuckling rogues, the two are on a quest to get Cinder some magic that works for him. Readers are thrown headfirst into the action of Cinder nearly completing his quest – only to stumble into new roadblocks, not counting the number of people he and Blacktooth have already seemed to piss off.

It is a fast-paced introduction that neither slouches in its debut, nor feels like so much is going on that the readers get whiplash. Douek does a fantastic job of pacing the action to set the tone for what we can expect out of the series. The hinting towards a larger world outside of Cinder’s views and goals, as well as the pauses from the hustle to re-group and breath, give readers a lot to ponder with this first issue.

Gutter Magic has carved out a niche for itself inside of genres that feel familiar, while presenting them in new and interesting ways – magic isn’t going to be the easy answer to all of Cinder’s problems (though whether he understands that or not is something to be seen in the rest of the issues) and that makes the journey all the more interesting for readers.

Be sure to check out the first three pages for yourself in our preview and pick up the first issue today!