Hellboy: Into the Silent Sea Looks Inward With a Lyrical Ghost Story 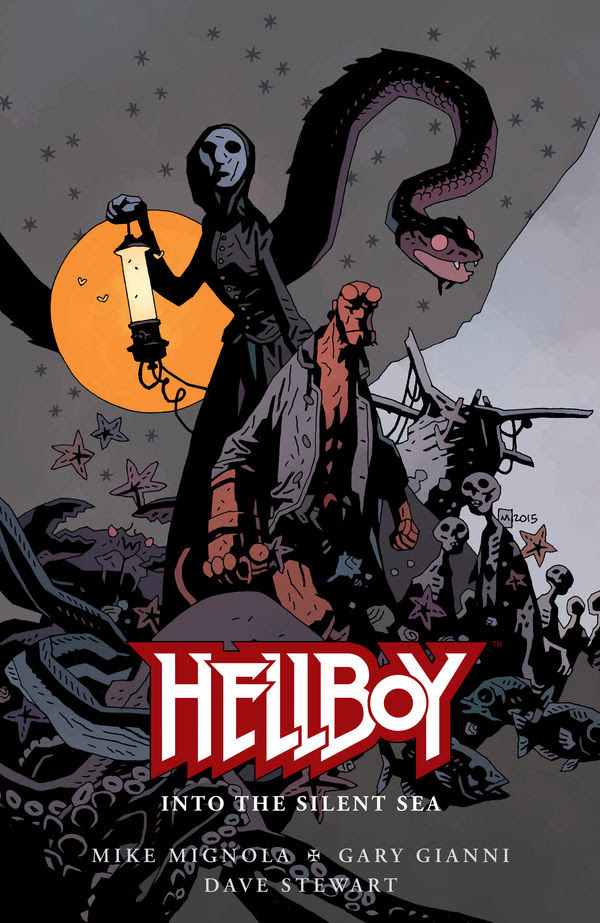 
Rating:
Hellboy is a comic that has resolutely denied easy classification. While the stories revolve around a relatively straightforward character, the charm of Mike Mignola’s stories has always been the way Hellboy, a hero designed in the model of Jack Kirby’s damaged bruisers, faced off with Gothic horrors, world legends, and beasts from beyond space and time. It was a comic series that always combined pulp, folklore and horror, straddling the lines between all three at its best before regularly evolving, finding new characters, moments, and places to focus on as it built to a finale that combined everything from Arthurian legend, Dante’s religious and political allegory, and Shakespearean tragedy.

Hellboy: Into the Silent Sea, the newest graphic novel from Mignola and artist Gary Gianni sits among the most lyrical stories in the franchise’s universe. Taking place immediately after “The Third Wish” and “The Island,” it’s a story that sees a drunk and aimless Hellboy being lugged onto a schooner, where a cruel and capricious captain and a mysterious woman debate how to use their new prisoner for their own good.

Despite a dreamlike tone and occupying a place in continuity mostly remembered for just how far it strays away from the whiz-bang heroics of previous tales, Into the Silent Sea is a story that embodies and explicitly deals with the contradictions inherent to the universe and the character.

Hellboy is mostly passive in Into the Silent Sea, bound to the mast of a ship as two time-displaced figures debate how best to exploit him. The ship’s captain sees Hellboy as a freak, easily sold to be gawked at by rubes.

He’s opposed by a woman known only as the Lady, who wants to use Hellboy to learn more about the world she and her occult academics puzzle over from a place of privilege. Both are clearly meant to be reflections of turn of the century imperialism, where the oppressor  explored new worlds, only to use what they found as a source of mockery or arcane whimsey.

Nearly everyone treats Hellboy and the gift of knowledge he offers as an object and little else. It’s telling that arcane knowledge is exactly what undoes everything by story’s end. It’s rare that Hellboy is this transparently metaphorical and if the story didn’t have such a purposeful, dreamlike atmosphere, it’d be easy to mistake the script for a Mignola imitator instead of the genuine article. However, Mignola proves that he still has the strongest grip on his signature character and his world and it’s well realized here. 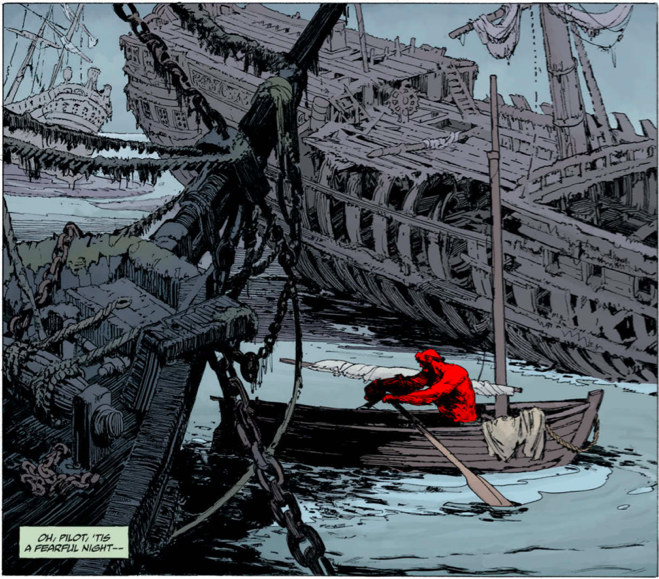 Gianni’s figures are elongated with faces so detailed they sometimes seem blurred and indistinct. It’s a strange choice that makes more sense as the story reaches its end but it’s a decision that trades atmosphere for clarity in a way that’s not always satisfying.

Dave Stewart, who should be instantly familiar for longtime readers, colors the tale and does an excellent job in an art style he’s not as often associated with. Stewart chooses flat grays, yellows, browns, and blues here, using only one bright hue, namely a rich, deep red for Hellboy, to emphasize the dreariness of the ship’s denizens and the alien nature of their captive. The palette dramatically expands by the story’s end and it deepens a story focusing on the difference between the enlightened and the unknown.

Into the Silent Sea is the ideal story for the graphic novel format, telling a tale outside of the larger Hellboy plot but offering a fascinating and insightful deconstruction of the universe’s and pulp-horror’s tropes.

Deconstructing those tropes is something Hellboy stories have always done quietly, often under layers of punch ups with monsters and horrors but it’s refreshing to see Mignola tell a much more focused, literary story here, one filled with references to maritime literature and poetry of the 19th and early 20th Centuries.

It’s well worth picking up, especially for those fascinated by the genre mashup at the center of one of modern comics’ most iconic characters.