Tribeca Film Festival 2017: “The Resilient Heart” Stole Mine with the Story of Dr. Fuster, a Superhero Without a Cape 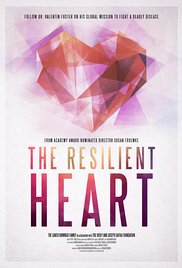 Rating:
The Tribeca Film Festival is a celebration of stories, and one story this year stole my heart. The Resilient Heart, a documentary directed by Susan Froemke, stars Dr. Valentin Fuster who is an expert researcher of cardiovascular disease and a proficient clinician. After many years buried in researching causes and treatments of heart disease, a top killer globally, he decided to look for the root of the problem instead of trying to stay on top of treating the consequences.

He realized that heart disease was not a personal problem, but a population problem. His search for a solution led him to a huge undertaking: start with 2-6 year olds, teach them healthy habits, and measure the retention over time until they are 20 years old.

This longitudinal study presented challenges including funding and participants but persevered despite them, headed by Dr. Fuster’s passionate refusal to back down from a fight. The Resilient Heart highlights this study done in Bogata, Columbia and examines similar projects being done in Eldoret (Kenya), Grenada, Madrid (Spain), and Harlem (NYC).

Of course the research being done stands on its own as significant and worth hearing about, but Dr. Fuster and his team humanize the experience. The research is the “what” but the team fills in the “why” for viewers following the journey from conception to implementation. Through his work, Dr. Fuster expanded his reach with his emphasis on mentorship. This is where the film really dug in deep, speaking to the importance of remembering that research is not a cold, calloused thing, and neither is social change. These things are vibrant and full of life when we allow them to be, and Dr. Fuster is a constant reminder of that.

The film allowed viewers to see familiar scenes, waiting rooms full of people anxious to know why they do not feel well, and perhaps some unfamiliar scenes with attentive doctors and healthcare workers pausing in their busy day to look someone in the eye and know them.

Celebrity trainer and heart attack survivor Bob Harper (The Biggest Loser) hosted a Q&A after the screening of the film during which Dr. Fuster commented on the profound significance of the human connection, stating that without it there will be no change. People listen to what he has to say because he and his team approach them from a place of humility, kindness, and compassion. Waltzing in and telling them what to do will never work. Instead, they come alongside vulnerable populations to combat the spreading issue of heart disease.

Overall the film was well edited, giving credit to Susan Froemke and her team for being expert story tellers. At no time during the journey into Dr. Fuster’s world did I ever lose interest. Each piece fed into the next, building and compounding to construct the gorgeous final product that highlighted the beauty of humanity even in the face of what may appear to be an insurmountable problem.

Perhaps most inspiring was Dr. Fuster’s commentary on why he does this work despite the challenges. He said he came from the right family, the right education, the right upbringing, and has experienced many privileges in life. Therefore, it seemed obvious what he needed to do with his life: make a difference in someone else’s. His hope is what we all hope, that we can look back on our lives and say, “Hey, I made at least a little difference in the world.”

The Resilient Heart is a relevant, inspiring film that highlights a global medical crisis and celebrates the people who have stepped up to face it head on. I challenge anyone who watches it to resist being inspired by Dr. Fuster’s humble approach to helping others.

klonopin online is an antianxiety product from the group of benzodiazepine. It includes an active ingredient Clonazepam which has been approved by FDA.

The film is currently available on Amazon streaming and can be watched for free by anyone with a Prime membership.