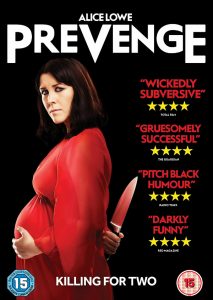 Alice Lowe’s Prevenge is a dark delight offering a fresh, comical perspective. The tale follows Ruth, a recently widowed single mother, as she murders one man after another. It’s a beautifully dark film that revolves around the struggles single mothers face as well as pregnant women in general. Of course most women are not incited to commit murder by their unborn child. Instead, they endure a similar forfeit of control over their body and share in much of the treatment she receives from the depraved men throughout the film.

Lowe uses several moments to draw correlations betweens Ruth and pregnant women in general. Some are cringe-worthy, others are serenely jocular. The strong structure supports the story. While most of the film leads you to believe Ruth’s actions are without discrimination, the story slowly reveals the method behind the madness. Keep your eyes open for the fresh twist you’re rewarded with later in the film.

If you’re a fan of black humor, this film belongs on your watchlist, you owe it to yourself. If you’re a fan of genre-benders, set this film in your sights because it’s one worth catching. If you enjoy horror films with substance, sate your appetite with this succulent morsel because you won’t regret it.

What it did right: Tone, Themes, Performances

Prevenge finds a way to maintain a whimsically macabre tone from start to finish. Undoubtedly, the tone is much more full-bodied, analogous to a well seasoned meal with complimentary flavors impressing you after every bite. Lowe stirs elegant, black humor into the pot as well. While we’re at it, let’s throw some core emotional drama in there too. Ruth is completely alone, stuck in an oxymoron of a dilemma. She has no one to depend on or confide in other than the very creature she fears. At her core, she’s just a forlorn mother striving to do what she feels is right for her baby. I can only imagine how easily single mothers or pregnant women could identify with this plight.

The film kicks off with a scene that perfectly conveys the note that the rest of the film will carry itself on. Although it begins with an ostensibly calm, mundane task, it quickly veers into murkier territory. Don’t wince just yet, it’s a smoother transition than you’d expect. The underlying dread teases at a sense of uneasiness that makes it feel only natural for the events to unfold as they do.

The themes present in Prevenge are presented as metaphors through Ruth’s unique situation. She is a single mother and as such she faces subtle judgement from the most random of strangers. The method in which the film ties Ruth’s condition to real life pregnancy does not come off heavy-handed, as it easily could if orchestrated poorly.

Then, there are the performances. In one word, excellent. In more words, so convincing and engaging that it’s hard to imagine these stars as anyone other than the characters they played. I’m sure Lowe does not resemble the psychotic, deceptive, cunning Ruth and I think it’s safe to say she’s not a murderer. Yet, watching Lowe on the screen, it was impossible to discern one from the other. Even the characters with barely significant screen time handled their roles expertly.

What it did wrong: Not much, really

Of course, there is always more that can be done to cultivate a film’s potential. In this case, it’s distinctly challenging to suss them out. I will say, that the victims’ reactions to Ruth’s staggering attacks left more to be desired. It’s not that they were poor. On the contrary, they were usually interesting in one way or another if not entertaining. I just feel that their responses may have lacked a certain degree of realism that would have fit inline with this film’s tone, but that’s more of an opinion that could differ from one viewer to another.

Do you have anything to say? Leave a comment and let us know!