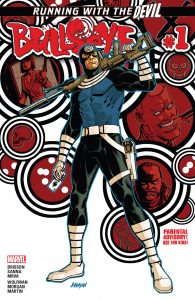 Garth Ennis’ run on Punisher MAX is a comic that, on paper, should be easy to repeat and god if Marvel hasn’t tried to make lightning strike twice. Ennis was vastly working through a formula, setting up a villain or group of villains, having them commit a series of unconscionably evil acts and then unleashing the Punisher on them like an avenging animal, his every immoral action justified by the malice of those he slaughters. It’s a formula that should work for any villainous or antiheroic character, who, by virtue of the antagonists, ends up looking at least a little heroic by nature of bringing down some truly terrible people.

To be fair, 2017’s Bullseye #1 isn’t the first time Marvel’s attempted this with Daredevil’s deadliest adversary. Daniel Way and Steve Dillon tried it back in 2004’s Greatest Hits miniseries and took another shot at it the next year with Punisher vs. Bulleye, a slightly more comedic take that leaned closer to Ennis and Dillon’s run on Marvel Knights Punisher in tone. Now, all around comics-lifer Ed Brisson is giving it a try with art by Guillermo Sanna in a debut issue that is much less than the sum of its parts.

Brisson’s script is a mishmash of a host of Marvel’s biggest recent hits. In a story that sees a newly rejuvenated Bullseye murdering his way through a host of goons as he looks for a challenge to suit his skills, Brisson mashes up slapstick homicide, pitch-black gallows laughs and some extremely uncomfortable imagery involving mass killings at an airport. Readers who’ve kept up with post-2010 Marvel will pick up riffs on Matt Fraction and David Aja’s Hawkeye, Nick Spencer and Steve Lieber’s Superior Foes of Spider-Man, and the tail-end of Ennis and Goran Parlov’s time on Punisher MAX, but it spotlights the tonal issues at the heart of the script more than anything.

Ultimately, Bullseye just isn’t a character very well suited to carrying a narrative by himself. Here, he’s motivated solely by money and preserving his legacy which, although it’s in character, is dramatically inert. We know Bullseye can succeed, know that he’ll push himself beyond what anyone expects but what makes that narcissism interesting is when it’s contrasted with a character like Daredevil, not just left here on its own. Sure, he gets off some good jokes and has that sense of undirected wickedness you want out but when it’s let out on a hoard of faceless goons, it feels less funny and more sadistic. We know Bullseye isn’t going to get what’s coming to him. We’re just watching him commit evil for evil’s sake.

Good thing Sanna’s here to pick up the slack. His figures are simple but stylish, full of sleazy life and with heavy brow lines and dark features that betray lifetimes of dealing on the wrong side of the tracks. That feature drawing really helps make up for a script that’s light on characterization and heavy on painting characters with an awfully broad brush. Likewise strong is Marv Wolfman and Alec Morgan’s backup story, a nasty little 8-page tale of Bullseye fighting his way out of a locked room with one, brutal little move. It dodges moral issues by playing the story straight, one bastard killing another in the most cruel way he can, no laughs to be had. Sure, it might not have the gags of the main story but it doesn’t have the tonal hangups either.

Brisson’s a talented writer and, as the fantastic Murder Book showed us, one who can balance of host of seemingly disparate plot elements, characters, and tones. Still, it can’t help but seem like Bullseye #1 fails to quite reach the excellence of the books it’s riffing on or gain any sort of subversive satisfaction from crossing the many lines of morality and good taste it happily does. There’s good art here and style to spare but the problems with tone, character and just about everything else leave Bullseye #1 feeling like a copy of a copy, with returns rapidly diminishing page after page.