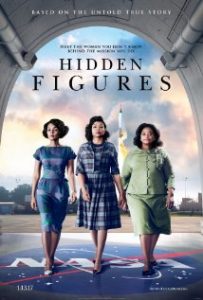 Hidden Figures, the newest film from writer/director Thedore Melfi (St. Vincent) tells the story of several African American women involved in NASA’s early space programs, their struggles to overcome the obstacles, and their successes. The story is an important one, but is the movie any good?

The movie begins in 1961, with NASA hot (or not so hot I suppose) on the heels of the Russians. Our three leads work as a part of the West Computing Group, the all African American group of female mathematicians who existed at the NASA Langley facility before computers came to see wide usage.

Taraji P. Henson stars as Katherine Goble, physicist and mathematician who receives an assignment to compute for the Mercury 7 mission, during which she finds herself confronted and hindered by the institutionalized racism.

Octavia Spencer plays Dorothy Vaughn, the de facto head of the West Computing Group but who has yet to be assigned the supervisor position despite doing the job, and Janelle Monae plays Mary Jackson, a mathematician who is assigned to work and analyze data in wind tunnel experiments.

Each find themselves constantly hamstrung by their colleagues and nature of the time. In course they each overcome and succeed in their field… sorta.

You see, this is where the movie sort of doesn’t function as a movie. Of the three main leads we spend far and away the most time with Henson and her progress with the Mercury and later Friendship 7 projects. We see her face the day to day struggles present in working in a room full of white men, the segregated bathrooms and work facilities, until she can’t take it anymore and shouts out the truth to everyone, opening their eyes to the problem. Apparently this room full of geniuses didn’t understand just what the problem was.

Meanwhile we see Spencer and Monae each have their own sorta arcs as they evolve their careers and navigate to success. As well as a romantic sub-subplot with Mahershala  Ali. But none of them have full arcs it feels like. We don’t see Mary Jackson successfully become an engineer, that happens in the end credits where they list she eventually receives her degree. Dorothy Vaughn, we see her entire arc in about 4 short scenes. The climax with Johnson feels almost unnecessary?

It feels like the film doesn’t have enough conflict, or enough steps in each characters rising action to hook us. Now, I am not suggesting they fictionalize it fully, adding fictional troubles where they weren’t or crafting narratives out of whole-cloth, but often it felt like we were watching women who had already completely smashed through the systems keeping them back.

This was more of a 2 hour “Watch Powerful Women Be Powerful” movie, and less of a full story. What it made me think was just how awesome a miniseries of all of these women’s lives would be. Multiple characters mention how they were among the first to be in desegregated schools, or to earn degrees from various previously white only universities. In essence, we were seeing their stories when they were already successful, and not the rise.

That said, what the movie does allow for, and what I do appreciate is it shows in each of its characters different means for success, or pursuing your interests. In Goble we see working the hardest she can in her specific field, and pushing for more and more responsibilities to better improve her performance.

In Vaughn we see a person who realizes her profession is short lived with the advent of computers and has the forward thinking to completely shift career paths and train her fellow computers with her, becoming early programmers and running those big IBMs.

With Mary Jackson we see a woman going past what was accepted in her role, that she had the knack to be an engineer and pushed to become the first in that field, already being successful in one and continuing her education. I thoroughly enjoy those three viewpoints of education: on the job, self teaching, and going to further schooling. All were successful, all have their merits. That is important I think.

Ultimately, Hidden Figures, is a worthy historical tale, one not known to the masses, but when it comes to hitting story beats, it feels lacking. Luckily, despite all that it is a feel good trip of women getting shit done that will hopefully inspire. Oh and the music featuring Pharrell is pretty swell too.