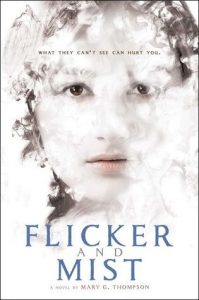 Rating:
Romance, intrigue, and plenty of action are woven into a rich and suspenseful narrative in this powerful YA fantasy. The mixed-race heroine Myra is a Flickerkin and can flicker (become invisible) at will. She hasn’t cultivated or revealed this ability, since Flickerkin are persecuted as potential criminals and spies.

When invisible people become tricksters and then murderers, Myra’s Flickerkin heritage becomes a deadly secret, putting her relationship with the leader’s son—and her own life—in jeopardy. Loyalties shift and difficult choices are made before Myra understands who she wants to be.

I picked up this book expecting it to be a supernatural coming-of-age adventure story like City of Bones or The Vampire Academy. Instead, Flicker and Mist is less supernatural adventure and more political suspense – and its theme of ‘otherness’ was less whimsically magical and more bitingly realistic.

The plot explores the paranoia of a small town who realizes that non-human ‘Flickerkin’ live among them. Paranoia is quickly followed by a witch hunt of mixed-race families and the hyper-focused, slow burn of their systematic persecution.

Smack in the middle of this powder keg we find our heroine Myrna. She’s a mixed-race daughter of a powerful Councilman, but not even her political privilege can save her from the populist hatred of Flickerkin. This becomes all the more urgent when Myrna realizes that she has the power to Flicker (become invisible) and must hide it from her community lest she be punished by death.

Thematically, Flicker and Mist was a frightening allegory for the resurgence of anti-Muslim and immigrant rhetoric this past election. It serves as an uncomfortable magnifying lens on human hatred and bigotry, without seeming overwrought with those themes.

Much of the heaviness of the social commentary is balanced by Myrna’s teenage voice and experiences. Her priorities seem extremely warped, e.g. when she’s worrying about a riding competition and a crush when her mother is being tortured.

Tonally, the YA perspective on this tragedy didn’t work for me, mostly because I kept getting frustrated with Myrna’s simplistic worldview and inability to sense the danger around her. The girl has zero sense of self-preservation. Then again, this innocence is also what makes the story unique, because other female heroines have been portrayed so hardened and tactical that they no longer maintain any relatable traits of a teenager other than their supposed age (lookin’ at you, Katniss Everdeen).

Unlike most heroines, she doesn’t attempt to fight back against the unjust regime or flee from it, but rather she simmers with it swirling all around her. She’s the frog in a pot of water, slowly heating up. She never jumps out, even when it’s boiling. She actually doesn’t do much of anything- she doesn’t have a lot of agency or power in this society, and her character development is minimal and reactive to tragedy surrounding her. Myrna underreacts to social injustice, even when it’s targeting her.

Overall, Flicker and Mist is an unexpected addition to the genre with a fresh take on suspenseful social commentary. It’s no adventuresome romp, but the slow swirling of discontent around the main character makes for an atmospheric read, even if it’s light on plot or character development. It subverts the typical ‘accept yourself’ lessons of the genre and goes for something deeper about human nature’s fear of ‘otherness,’ and that’s what makes it successful.

3 winners will receive a signed finished copy of FLICKER AND MIST, US Only.

Mary G. Thompson was raised in Cottage Grove and Eugene, OR. She was a practicing attorney for more than seven years, including almost five years in the US Navy, and is now a law librarian in Washington, DC. She received her BA from Boston University, her JD from the University of Oregon, and her MFA in Writing for Children from The New School.