Office Christmas Party, What You Want But Can Never Have 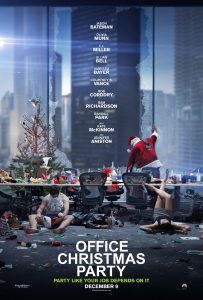 A Chicago based branch of a tech company s in dire straights. In under performing in the final quarter of the year, they face lay offs and possibly closure unless they can seal the deal with a new client and they only have one day to do it. Starring Jason Bateman as the straight guy, T.J. Miller as the eccentric rich party guy, and Olivia Munn as hot nerd. This year’s R rated holiday flick is here with Will Speck and Josh Gordon’s Office Christmas Party but how does it stack up to those that have come before such as The Night Before? Well let’s get into it.

The plot of this movie is nothing to write home about, it’s rather cardboard, as are most of the characters. It all functions to hit some great jokes and otherwise mostly meh experience for the 105 minute runtime. It’s a comedy, a genre which gets tons of slack from the general audience. So long as you’re laughing it’s doing its job, that whole thing. And if that is the approach you take, I think you’ll enjoy your time spent.

The cast is loaded with really funny, charming people who we’ve seen tear up the screen, even if they’re used in pretty standard and unimaginative ways. In case my sentence in the first paragraph didn’t quite land at the time: Bateman, Miller, Munn, Aniston, hell even side players like Rob Corddry and Jillian Bell all play characters we’ve seen them do before.

Miller’s Silicon Valley character Erlich Bachman, Munn’s entire career before becoming an actress, Aniston in her more recent roles like Horrible Bosses, Corddry’s role in Ballers and Jillian Bell is essentially her role in 22 Jump Street, though this time she’s a pimp. That may seem like an unnecessary, lengthy digression but the point is that the fact that I can name specific examples of these actors/characters prior to this film is more than just a ‘feels familiar’ situation.

It’s absurd when you think about it after the fact, no doubt the movie was pitched with these roles as shorthand and then the creators just didn’t seem to think it necessary to go back and add any spice to the mix. Regardless, some of them still manage to be endearing, while others fall flat.

The movie’s blandness aside, it is fun enough. Office Christmas Party is one of those party movies that show you a collection of your favorite actors and actresses having a good time and you can’t help but enjoy yourself in their antics, hoping beyond hope that your own HR department get’s the stick removed outta their ass and manage to throw a holiday party even 1/20th as fun as this imagined one (Pro Tip: they won’t, we’re doomed. Real life work sucks.)

If you work in any sort of office scenario the relationships you see playing out on screen will have special soft spots for you and win some extra chuckles, no doubt.

Jokes aside, the movie does swing for the fences when it comes to having a heart-warming “coworkers are family” message that succeeds in points and fails in others. The jobs of everyone are saved in a very groan-worthy way as *spoiler alert for the worst part of the movie* Olivia Munn’s character is able to produce Wi-Fi through the power grid?

I’m fairly certain I don’t get it, and if it is theoretically possible I am mighty surprised, but the writing certainly didn’t sell the idea as feasible, nor Munn’s acting as believable. In her cliche Eureka! moment she stares wistfully off screen and recites techno-babble monotonously, leading to the last 10 minutes of plot wrap up that is damn underwhelming.