Lion, Because it’s Been a Minute Since you Cried in Public 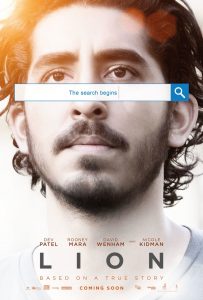 A tale spanning thousands of miles, two continents, two and a half decades, and two families. Lion, the feature directorial debut from Garth Davis, tells the story of a five-year-old boy named Saroo, who becomes lost during a nighttime train ride. Where his journey takes him and his way back unravels over the next two hours of human experience.

I say human experience because this movie truly runs the gauntlet of Life, from the valleys of poverty and street children to the highs of love and human resiliency. With the first half of the movie following Sunny Pawar’s portrayal of Saroo from his life stealing coal with his brother Guddu to the fateful train ride that sees him lost hundreds of miles from home only to have to navigate the terribly impoverished world he finds himself in.

At every turn this poor child is having to make choices that he knows in his guts more than in his head are what is right and wrong. Where Life of Pi obscured the terrible reality behind magical realism, Lion lays them bare and the audience is all too aware of the feeling of wrongness in the hearts and eyes of certain characters. The movie navigates that deftly.

The second half of the film has Dev Patel playing the role of twenty-something Saroo, now fully assimilated into his new life and enjoying it before being consumed with obsession about finding his home. This is where the movie has a few hiccups.

We see a gathering of twenty something college students discussing Saroo’s history with him, in a generally appreciate and helpful way and possible solutions was nice to see. It feels like too often that age range is maligned in their representation in entertainment, maybe I’m way off base there.

The solution to Saroo’s woes, or at the very least the path by which he decides to navigate is Google Earth. That’s right, the movie was always deep down an ad for Google Earth. Not really, and because it is a true story to depict any other means by which Saroo is able to begin to search for home would be dishonest, not that that is unheard of in ‘True Story’ movies.

The problem here, for this reviewer at least, is we are treated to some of my least favorite tropes in modern cinema: The Computer Screen Theater Screen. Plenty of moments of scrolling through pixelated landscapes of India, those same majestic landscapes we saw in the opening credits, follows with outrageous pixelated zoom-ins cut back and forth with Dev Patel’s crying eyes. It is a jarring juxtaposition that while it doesn’t kill Lion, it certainly is a thorn in its paw.

The other point I seem to circle back to is Rooney Mara’s character. She plays a love interest that seems to only serve as a mirror for Saroo’s obsession to play off. It doesn’t necessarily drag the movie down, but it does have me wondering if she is a real person or a studio-creation to add romance into a movie that would otherwise be lacking it. Not that love isn’t present, because that is truly center stage, Familial Love and sense of home.

As the credits began to play, I could look at the face of every other reviewer and see them batting tears from their eyes, whether that’ll make their review or not, it happened, yours truly included. Lion is an incredibly cathartic experience and well worth your time and consideration. It speaks true of a life that millions experience but most here in America are, fortunately, not subject to. But not being subject to it makes it even more important that we’re aware. As the final card before the credits roll says, the film and it’s makers are dedicated to bringing awareness to the plight of street children.

Lion is in theaters every where.