Nocturnal Animals Will Tear You Apart 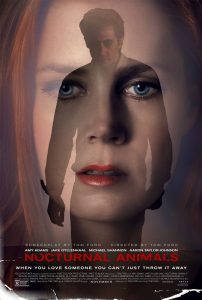 “When you love someone you can’t just throw it away” so proclaims the poster to writer/director Tom Ford’s newest film Nocturnal Animals. An adaption of the 1993 Austin Wright novel Tony and Susan, it tells the story of Susan Morrow, a dissatisfied art gallery director who receives an unpublished manuscript from her ex-husband. As she reads the tale she begins to see the parallels between her life and the book.

That is the synopsis as distilled as possible to reveal nothing. The movie is told as several narratives, the present day real life of Amy Adams as Susan Morrow and her husband, played by Armie Hammer, the story within a story of Tony Hastings (played by Jake Gyllenhaal) and his family who have a terrible nighttime drive and the after effects of it, and the flashbacks to the past in which Susan and ex-husband Edward (also played by Jake Gyllenhaal) met and had a relationship. Each one of those nested narratives all inform the other and it is clear what the novel represents to the characters outside of it.

The movie is simple, but impactful. Anyone who has gone through a wringer of a relationship will no doubt see parallels to their own experiences in those faced by our flawed ensemble cast. No person is perfect, and while they try to make themselves happy it is futile in every step as the realist drags down the romantic, as the romantic struggles for control and agency in a tough world, as the cop works towards justice in a system that is failing. It is draining to watch the characters get run through the crucible of experience and to address their own failings and wrongdoings.

While Amy Adams is our protagonist, it is revealed piece by piece that she is not blameless in life, and that is a true enough reminder to the audience. Any person who watches and boils it down to “That person is a bitch, that person is a hero” isn’t paying attention.

Just because we are the main character of our own story does not make us the hero. Everyone has whether indirectly or directly, accidentally or with furious intent hurt another, and often we don’t reflect on that fact. We never want to imagine ourselves the villain. That is the experience our protagonist is moved through, their arc of self-evaluation.

The movie looks slick. Opening with a credit sequence that both unsettles and hypnotizes, pulling your gaze into the screen. Great cuts and mirroring images throughout, it is clearly a product of a well-honed eye, glue you to the screen in a way that will have you forgetting you’re ostensibly watching a woman read a book.

Maybe I’m a sucker, an easy mark for movies with this subject matter. It checks plenty of boxes I like in cinema and stories. Features a writer (because I’m clearly a narcissist). Makes me feel. Has me guessing throughout. I cannot overestimate how much I enjoyed Nocturnal Animals as a piece of visual storytelling.

I’m already looking at Tony & Susan sitting in my Amazon cart and I am eagerly looking forward to reading the book, to see how Ford himself changed the narrative to reflect what he felt was worth the effort of transforming it from page to screen. Nocturnal Animals is a movie about the power stories can have over us, and it is powerful in its demonstration of that. In select theaters now.