The Art and Making of Hannibal: The Television Series 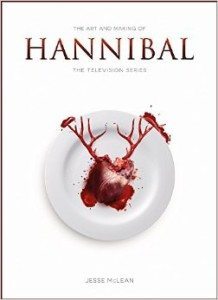 As a fan of the show Hannibal, I just knew I needed to get my hands on the beautiful art book from Titan Books. They were kind enough to send a review copy, and I immediately delved into it. The art book provides page after page of not only behind the scenes images, but extra explanations and commentary on the various scenes. It also includes information about filming itself, why certain outfits were chosen, how the death tableaus were constructed, and so much more. Whether you’re just a casual fan or a hardcore fannibal, you’re going to want to get this book.

The Art and Making of Hannibal is, first and foremost, an art book by definition. There’s a lot of commentary and interesting tidbits, but there’s also a lot of images. So if you like pictures, this book is definitely for you. Joking aside, the way the images are laid out beside the explanations really gives the reader a better understanding of exactly how much work goes into every scene. It isn’t just tossed together, as evident by the final product. Though while the final image that shows up on our television screens may seem flawless, there was a lot of blood, sweat, tears, and most importantly creative thought put into every aspect of a scene.

From Hannibal’s clothes, to his office, to the death tableaus, and the various deaths of supporting characters, all of it has a purpose. The book explains it in detail. It also goes into great detail providing commentary on the characters depicted in the image. There’s a chapter on Jack Crawford, Will Graham, and Hannibal himself. The science team gets their own chapter where their scenes and the characters themselves are dissected down to the bare bones. It is going to give any reader a deeper appreciation not just for the show, but for the actors who bring these wonderful characters to life.

Besides the images, and the commentary accompanying them, I appreciate how in-depth it really is. It isn’t a book that I’ll read once and put away never to crack open again. On the contrary, this is a book that will probably take me years to really get through everything that is in it. Reading is easy, but this beautiful art book definitely leaves a lot to digest, and the sheer amount of information it gives should be enough to encourage readers to take it easy. It is worth its weight (or in this case, its price tag), because anyone who purchases it will get a lot of bang for their buck in terms of content.

All in all, I definitely recommend The Art and Making of Hannibal the Television Series to anyone who is interested in learning more about what goes into making this show great. Hannibal is one of the most complicated and visually pleasing shows on television, and the art book only begins to scratch the surface of all the work that goes into bringing it to our screens every week. Just as thirteen episodes is never enough for a season, one-hundred and seventy-six pages will never seem like quite enough to explain how this wonderful show is created. It does, however, put a good dent in it, and definitely gets my recommendation.