Bleed For This or, What’s Your Excuse? 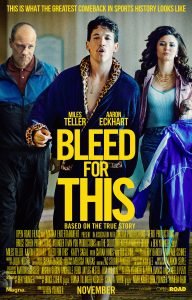 The latest movie from Ben Younger (whose last directing credit was an episode of Army Wives in 2007… woah) is the true story of boxing champ Vinny Pazienza, who suffers a broken neck in a car accident, and his tough climb back to the top. It stars Miles Teller as Vinny Paz and Aaron Eckhart as his coach Kevin Rooney.

There seems to have been a plethora of boxing flicks the past couple years, which has me wondering what the environmental condition is that inspires the trend, with Hands of Stone earlier this year, Southpaw and Creed last year and a few more coming out of the UK in the next few months. So how does this stack up?

Miles Teller is great as always, he’s the backbone of the movie. Between him and Aaron Eckhart (with mustache and balding head respectively) is a relationship that is endearing enough for an otherwise good enough movie to have some legs. The flick is rife with boxing tropes but much like Vinny Paz’s style of boxing, takes them on the chin and keeps ticking, perhaps because they are real.

That leads into the other thing that Bleed brings to the screen: a sense of authenticity. The opening of the movie deals with a particularly brutal weight cut Paz has to undergo to be able to fight, after which he is in the hospital all messed up and its addressed simply as a part of the game. Paz and Co. deal with managers who don’t want to help, or who are chasing a buck even if its a bit sketchy.

The sound design of the flick is pretty great and utilized in a way to play off head trauma, and I can say more than any other boxing outing I’ve watched the audience definitely feels the pain of the main character, specifically during his time in the HALO rig (no, not Master Chief’s Mjolnir armor ya goons)  tying into the sound, is the soundtrack which does a stellar job of selling the time period without being obvious or rote choices.

I’ve complimented other films on this (or tore them apart because of it… Suicide Squad) but using an era specific soundtrack that isn’t just the hits is my jam. Using songs that fit the time but are not just emotional shorthand (think playing Creedence Clearwater Revival or Jimi Hendrix over Vietnam sequences as example of the shorthand) helps a movie feel real and not hokey.

On the negative side, this movie does feel like it skips around frantically from scene to scene. There are tiny single scene deviations to introduce different girlfriends, to address the characters possible gambling addictions, but all are dropped before long and don’t really go anywhere.

That has the unfortunate effect of making the movie feel like it’s missing a character arc for our hero. In fact the movie isn’t about change at all, it’s about sticking to your guns no matter the obstacle and this is made clear with Vinny Paz’s final lines in the film.

Bottom Line? This guy broke his neck in a car accident, came back and busted his ass and kept his dream alive. What’s your excuse? Bleed For This  is in theaters now.