Go Deeper “Into the Badlands” Season One, Arriving on DVD and Blu Ray Today! 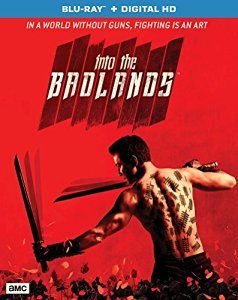 Take away the gratuitous violence (though this series does air on AMC and this is tame compared to the bar set with The Walking Dead season 7 premiere, so your milage may vary on violence), and the first season of Into The Badlands is the plot to a YA novel. One that’s obviously not meant to wrap up in one book, spending all of its time introducing the world and the characters in broad strokes. Not to say I didn’t enjoy the show, there were many highlights to it, but ultimately it’s not the tentpole programming AMC was hoping for.

In the first season, Sunny (Daniel Wu) finds a teenage boy named MK (Aramis Knight), who harbors a dark secret that may unlock both of their pasts and bring them towards a better future, but not without a lot of fight scenes in between. Barons rule the Badlands and Clippers like Sunny are drawn into the skirmish through their loyalties, which results in some amazing visuals and fight scenes.

Which are glorious, well choreographed and stylish and spread out amongst much of the cast. It’s those fantastic scenes that underlie an exposition-heavy plot that meanders, spelling many things out for viewers and cheapening the experience by having things blatantly said rather than shown.

There are no fewer than three sets of would-be star-crossed lovers, between Sunny and Veil, Jade and Ryder, and MK and Tilda, who go through the trials and tribulations, suffering in attempts to do what they each think is best for their counterparts. It was muddled and tedious at times, but took up much of the screen time in this six-episode first season.

What wasn’t taken up by fighting and star-crossed lovers was an exhausting amount of double-crossing and world-building. Every single character has a moment where they backstab, double-cross, or go back on their word. It’s hard to get a beat on anyone with the amount of scheming going on in the most predictable of ways.

As for world-building, it is obviously not our universe, past or present, that the series is staged in, but the lack of guns while still having automobiles is worth a moment’s pause to think about the setting. There are gorgeous poppy fields, oil fields out there somewhere, towns, trees, rivers, and many other setting explored that, like the fighting, make for real visual treats.

Beyond that, the first season felt like one long introduction to a universe stitched together from a multitude of ideals, introducing jargon to delineate class, more than a few different groups, and some lore that is teased and hardly explored throughout the first season. Worst of all, Into the Badlands lacks any sort of brevity or comedy, ironic or not, making for a very scowl-y show.

Voracious fans of Into The Badlands will be delighted to know that there are more bonus features on the second disc than there are episodes in the entire first season. Unfortunately, the bonus content isn’t exclusive to the home release.

Anyone curious for behind the scenes footage can find Inside Into the Badlands segments on AMC.com right now and watch the same clips that were collected. If you have already seen them on the website, they don’t add much to the home release. But, for casual fans who want to revisit the series at their leisure and haven’t kept up on bonus content released after the initial airing, each segment is broken up by episode and includes some insightful commentary from the cast and crew.

It was particularly enjoyable to see the cast explain where their characters were at mentally and emotionally in each episode. Each segment is approximately five minutes long and gives just enough perspective and trivia knowledge (Sunny’s got 404 tally marks on his back for instance) to be worth the time to watch.

The same can be said about the Anatomy of a Fight feature. It is not new, and it is still currently available on the website, but for those fans who don’t feel the need to seek out extra content until they get the home release, it’s a real visual treat. Each episode contains a major action sequence and, again, there are six segments that focus on each of the major moments in every episode.

Daniel Wu, who is also an Executive Producer and helps to coordinate the stunts on the show, gets a lot of time across these six segments to speak about his thoughts on each big battle, but he’s not the only one. Many crew members who contribute to the scenes – including stunt coordinators, Fight Directors, and more – also get to chime in to talk about the challenges and all of what actually goes into the beautiful choreography of the show.

Building the World of Into The Badlands is the bonus feature for anyone who is curious to explore the world-building of the show. Anyone looking to find out about the steampunk influences in the show will enjoy seeing how it was planned and put together. Viewers get a better look at how the sets were constructed and an idea of what was CGI’d into the show.

The Barons focuses on, obviously, the Barons and those closest to them. However, anyone who wants to know more about anyone other than The Widow and Quinn may find themselves disappointed. Their symbolisms and thought-processes are very well explained in the short segment, but audiences know there is also Jacobee (and possibly more, there were three Barons who denied attending Quinn and Jade’s wedding by letter) and he isn’t mentioned in this segment.

The same could be said about the segment for the Clippers, focusing primarily on Sunny, who is the most well-known Clipper. At least this segment goes on to explain the hierarchy of Clippers, the collective army that any Baron commands. Sunny is a Regent and Clipper, meaning he’s one step below Quinn. MK is a Colt, or a Clipper in training.

Tilda is also mentioned in this segment, as a Butterfly under The Widow – an assassin that works in the same was as Colts do for Clippers. And, weirdly, Veil’s character is explored in this section, since she gives so much support to the Clippers. There is an exploration of morality in this segment that’s missing from the ultimate search for power of the Barons’.

If the Anatomy of a Fight segments weren’t enough, there are also three Into the Badlands Fight Camp episodes that focus on teaching all of the actors on the show how to believably fight. The first episode focuses on Master Dee Dee and his choreography, with an interview from him that may be my favorite special feature because it’s easy to see his passion for the project. It also includes a lot of people doing kung fu in basketball shorts.

The second segment focuses on “creating real kung fu” and explores how they brought authenticity to the show. In the first Inside Into the Badlands segment, we heard an extra talk about how they incorporated everyone’s various backgrounds and strengths into the show and this segment shows how that was possible.

The final segment literally brings it all together and showcases what kinds of decisions actually go into the final filming of the scene. For anyone who watches the show and wonders about the fight scenes, these Fight Camp episodes may be even more insightful and interesting than the Anatomy of a Fight segments.

If you haven’t been drowned in special features yet, there is one more and that is the Into the Badlands Digital Comic. As a comic reader, it was interesting to see it presented in this format – the comic scrolls page by page top to bottom so that viewers can read the panels, but it’s difficult to actually appreciate them. That also makes it the longest of the segments, with scrolling credits between each issue. Like all of the other segments, these comics are available on AMC.com and it may be easier to read at your leisure on a non-scrolling screen.

For anyone keeping track, there are nineteen special feature clips collected from AMC.com and placed on the second disc of the two-disc blu ray and digital HD combo pack. That is a lot of bang for your buck, even if you’re paying for convenience more than anything. Casual fans will get a kick out of exploring the episodes deeper and hearing from the cast and crew about many different aspects of the show.

While I personally don’t find it must-see television, Into the Badlands is a magnificently choreographed series with a lot of potential and a passionate cast and crew. The show takes the first season to lay the groundwork of a complicated society, that paves the way for an exciting second season through the cliffhangers left behind.

Season two of Into the Badlands has an expanded season order of 10 episodes and will be on AMC in 2017.

A REVIEW COPY OF INTO THE BADLANDS SEASON ONE ON BLU-RAY COMBO WAS PROVIDED BY ANCHOR BAY ENTERTAINMENT IN EXCHANGE FOR A FAIR AND HONEST REVIEW. NERDOPHILES WAS IN NO WAY COMPENSATED FOR THIS REVIEW. OUR OPINIONS ARE OURS AND OURS ALONE.