Tr-lol-ls? Terrible. That Joke, Not the Movie… WAIT COME BACK!

How does this movie based off a Scandinavian toy brand fare? Find out with our review of Dreamworks Trolls. 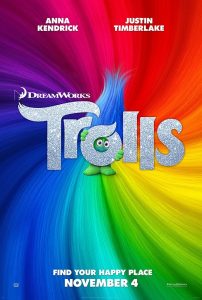 From the mind of Mike Mitchell, director of Alvin and the Chimpunks: Chipwrecked, Sky High,  Deuce Bigalow: Male Gigolo,  and Shrek Forever Aft– wait what?!? This guy made Deuce Bigalow? Well alright. Anyways, here comes Trolls, the movie no one was clamoring for, based off of property that has long since passed its peak… or has it? (Spoiler Alert: this is the new peak!)

Trolls scrapbooks a storybook world in which the titular creatures live an existence of perpetual happiness. They dance, sing, hug, cheer, and celebrate generally good vibes all the long day while their neighbors, the grouchy Bergens, experience no such joys. In fact, the only times they can even experience anything close is when they ingest a delectable troll. As such, the movie opens with a prologue depicting the Bergens keeping the Trolls inside a tree until the day once a year in which they’re allowed to eat them. But on this day the Trolls, lead by King Peppy played by Jeffrey Tambor, have escaped! Flash forward twenty years of good times for Trollkind, and the most depressing era in Bergen history. But can the Trolls safely remain in hiding, especially when they’re about to throw the biggest party of their lives?! No! And with that, it’s up to Anna Kendrick’s Poppy and JT’s Branch to save the day!

Some disclaimers: I don’t particularly care for musical numbers in my flicks. Spontaneous song and dance pulls me out of the story, no matter how good the song may be. I’m not the target audience for this movie either; I’m a late-twenties grown man (mostly) without kids (absolutely.) Now with both those things in mind… I dug it! The movie has an in-universe reason for the songs which makes me not cringe whenever Poppy or friends let their hearts open up and belt out Lionel Ritchie tracks. The songs on display are fun, although I can do without some of the ‘parodying’ alterations they do lyrically to make the movie fit the theme more. I know, I know, for a guy who said he doesn’t like songs he sure is picky. But I digress.

The other HUGE selling point of this movie is the aesthetic. It’s not something I think the trailers did a good enough job showing off, as from what I remember seeing the movie looked like a traditional CGI romp, but once you get into the theater you see just how lovingly crafted the movie is. The world itself looks like it’s made out of felt, like a scrapbook, reminiscent of Little Big Planet — if you know the games. The different monsters and settings all have a fuzzy quality that separates the movie from the sleek shine of the others in its genre.

The humor is pretty great, with solid laughs throughout and only few stinkers — I say that to remain safe, I honestly can’t think of any joke that completely missed the mark, but Humor capital ‘H’ is subjective and all that. Speaking of stinkers, there’s a plethora of fart jokes which kids love (as do most grown folks) and the catchy tunes, they’ll eat it all right up.

HOWEVER! If you take a child to this movie, and the child cannot refrain from heckling the movie (heckling, not laughing at or asking questions about, heckling) you owe it to the entire rest of the movie-going, decent examples of humanity to get that kid outta there. Take it as a teachable moment and instill in them just why the hell it is so rude to make a damn ruckus in the audience while other folks are attempting to enjoy themselves. That’s right! I’m talking to you, 10-13 year old boy whose name must be something awfully unique and spelled with at least one ‘y.’ I came here to laugh at the funnies on screen! Not your simpleton retorts of ‘Biohazard!’ or YouTube meme comment-esque filth about  ‘John Cena!’

Final Thoughts: Trolls is a surprising delight, being better than it has any natural right to be.  The look, sound, and feel of the movie all synthesize into a fun time at the movies. In theaters now.