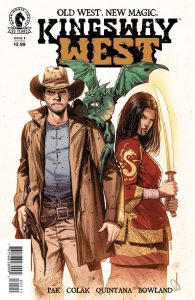 Fans of the weird west genre are in for a treat with the latest offering from Dark Horse Comics.

Kingsway West #1 introduces readers to the story through a series of fast-paced, unevenly spaced time jumps through the main character’s life. Kingsway Law, a Chinese gunslinger, has the generic backstory for a reluctant hero in the wild west. In a twisting of history, the Chinese and Mexicans waged a thirteen year war on the west coast of America in search of the fantastical substance red gold, which gives varying abilities to those in possession of it.

The protagonist manages to escape both sides of the war as it winds down and marries a Mexican woman named Sonia. Five years later the peace they’ve built for themselves is shattered when a mysterious Chinese woman comes looking for Kingsway. Suddenly, his wife is missing, the mysterious woman may have dragged him back into the fray whether he likes it or not, and a cliffhanger hints at more players in the game of mining for red gold.

The first issue has a lot of potential, setting up the world nicely with the help of art and coloring from Mirko Colak and Wil Quintana respectively. The creative team is able to capture a war-torn landscape that incorporates what one would expect from the wild west, twisting fantasy creatures to be just this side of realistic with jackalope, dragons, and anthropomorphic bears all seemingly at home in the setting.

From the cold, broken ashes of war to a more hopeful wild once the years have passed, it really is the art that sets the mood for a fairly generic story. Colak and Quintana do well to distinguish a multitude of characters while managing to capture cultural differences, infusing them with wild west influences. And for fantasy fans, the series starts with a map that shows the players in the game.

With the introduction of Kingsway, readers hopscotch through some important milestones in his life. While we get to witness the first meeting between him and Sonia, before she becomes his wife, the relationship jumps five years into the future after that. That means readers miss out on some of the emotional connection between Kingsway and Sonia, making it difficult to really feel as though he’s lost something significant to motivate him into action. If the protagonists’ motivations are based solely on this love, it would have been nice to see it develop.

That being said, I’m interested to see where this story goes. The factions developed and the opportunities presented by twisting the wild west into a fantasy land built on the gold rush give the creative team endless opportunities to play around with in this alternate history. The scenery and fantasy elements went a long way in keeping me interested in what I was reading.

There are some fascinating ideas in Kingsway Law and the first issue puts a lot of the building blocks in place for a sweeping epic western-slash-fantasy showdown, but it’s difficult to connect to a generic hero, who I hope gets more fleshed out alongside the rest of the world in future issues. If my biggest gripe with the first issue is that I wanted more, I can’t complain too much. Pick up Kingsway Law #1 at your local comics shop and let us know what you think!