Doctor Strange-love or: How I Learned to Stop Worrying, Marvel’s the Bomb

The latest entry in Marvel’s concerted attack on Global Wallets is here. Does Doctor Strange live up to the legacy? 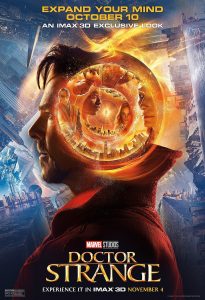 The latest entry in Marvel/Disney’s concerted attack on Global Wallets is here. Does it live up to the legacy? Put together by Scott Derrickson, director of a score of supernatural horror movies such as Sinister, Deliver Us From Evil, and Hellraise: Inferno and frequent collaborator C. Robert Cargill, the writer on those Sinister flicks amongst others– you know, actually writing that out and looking at those filmographies… My Dormammu, it’s amazing Marvel a) went with these dudes and b) damn did they deliver!

Dr. Stephen Strange is the dopest neurosurgeon in the land, patching up brains and spinal cords while answering music trivia. If you already smell a similarity with a certain other Marvel hero, your nose is money. He comes off much like another Mr. Stark, but more on that later. This short introduction of Strange as a bit of an ego maniac prefaces his tragic accident which leaves his hands mangled and unable to perform. What follows is the origin story you might expect but chockful of the visuals needed to tell the first Marvel movie to really lean into the magical.

The casting in the flick is absolutely superb. Mads Mikkelsen is a personal fave, though I’ve never seen him in Hannibal — heresy I know — and his Kaecilius brings a bit of a Charles Manson vibe, between his girl gang and forehead etching. Chiwetel Ejiofor plays a great Mordo who gets enough screen time that we really are able to understand his views of the world and the logical consequences of them. I was a doubter of Cumberbatch for Strange, if only because it seemed so obvious a choice. What I didn’t know is just how much more jocular this Strange would be and how well ol’ BC could handle that. That isn’t the Cumberbatch I expected, and it was a delight to be surprised by it. As mentioned earlier, this Strange feels very reminiscent of Tony Stark and that may be the one flaw of the movie.

Let’s just go ahead and get into it here then shall we? I know this choice is deliberate, that Stephen Strange is arrogant and jokey in a similar vein to Tony Stark. I get that it is true to both characters in the comics, so how can that be a flaw here? Maybe in Doctor Strange it isn’t a flaw, but as a part of the MCU it adds to a problem that has been occurring whenever  multiple characters share the screen. That the characters begin to all sound similar. (Mostly looking at you, Avengers: Age of Ultron.)

The sameness in tone between characters who should really have different voices. Much like a Bendis book come to life, sometimes our merry band of heroes are a bit too meta and quippy for their own good, with folks like World War II Vet Steve Rogers and Pseudo Norse/Space God Thor making jokes that would just as easily, or worse more naturally, come off the tongue of Tony Stark. Anyways, like I said, for Strange it is fine, but I hope it’s something the creative teams have made a note of and try to distinguish in later movies. Whatever, the movies are fun, who am I to complain?

Doctor Strange is the flick to really bring the magic to the MCU, and while the likes of Thor and Loki dabbled in magic — often going the way of ‘sufficiently advanced science’ as a way to keep their magic grounded and work with the world of WWII vets and science armor — Strange goes sideways. It offers a vagueness to its magical system that really works for me. While the motions the sorcerers perform are specific, they aren’t calling out wingardium leviosa  or stupefy! every time they harness the magic of the multiverse.

To that end, there is a strong vibe of The Matrix throughout the more magic heavy scenes, the sense that those with the power can manipulate reality around themselves however they see fit. The movie is then allowed to be weird for weirdness sake, to have overly absurd visuals. The climax even features the explosive, seemingly world ending doom of the combining of dimensions, the type of cataclysm movie-going audiences have been watching and bemoaning for years now, and yet it subverts it entirely. By literal hand-waving, the explosion-fest is altered into something original and acceptably different from the tired trend. Doctor Strange gets to have its cake and eat it too.

I’m sure there are dozens of more points I wanted to make in this review and dozens more that I should, but it was an eyeful of movie. For the first time in MCU history I can confidently recommend seeing a flick in IMAX 3D, while Guardians of the Galaxy was a delightful romp through the cosmos that benefited from the larger than life screens, Doctor Strange is a trippy, metaphysical adventure that uses all that the third dimension has to offer to provide an experience.

Oh, and about that title, the whole, ‘Stop Worrying…’ thing. I consistently think this time, this time, will be the movie from Marvel that doesn’t crush it. Each time, they prove me wrong. So long as the creatives are in charge and trusted to make their ideas a reality, we are in for a world of treats as we race to see each one.

Doctor Strange is in theaters everywhere.