DVD Review: iZombie Season 2 is Out Now on Digital HD and DVD!

Warner Bros. Home Entertainment provided Nerdophiles with a free copy of iZombie Season 2 on DVD which is being reviewed in this blog post. The opinions we share are our own. 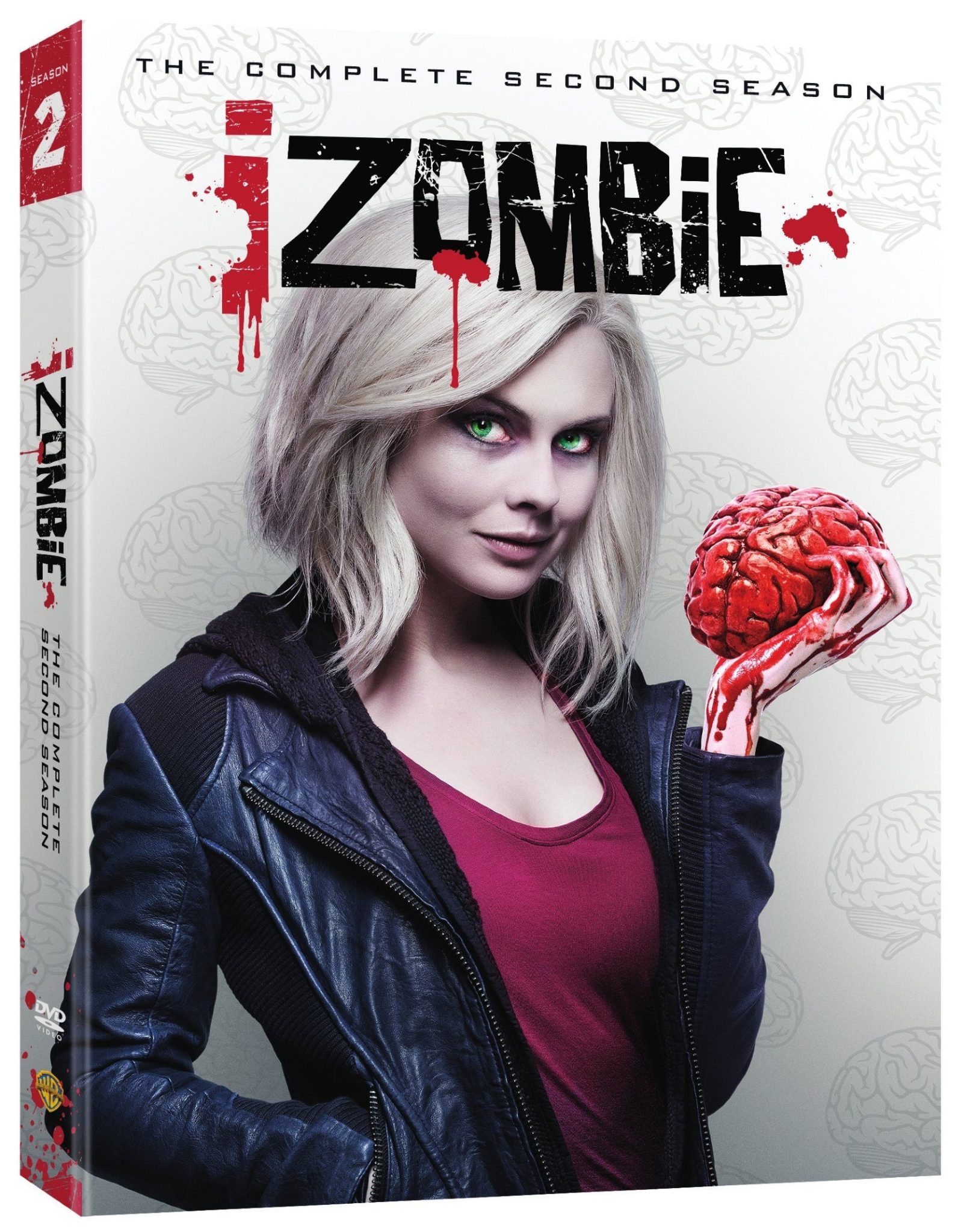 It’s no secret that iZombie is an amazing series. From the very first episode it’s been one of our favorite comic book adaptations to hit TV in the past few years. There is something incredibly charming about the kooky procedural. Who knew that zombies eating brains could be so much fun? Rose McIver once described the series as a “Zom-Com-Rom-Dram” and she couldn’t have been any more correct.

The first season did a fantastic job of setting the scene and highlighting the series’ potential but the second season truly drove it home.

Before I get started on my own, brief review of the season I want to point something out for you. iZombie Season 2 has a 100% rating on Rotten Tomatoes. Now the first season has a rating of 92% which isn’t bad but it’s also not 100%. Where a lot of shows go through a bit of a sophomore slump in their second season, iZombie saw a resurgence. And while you may not believe me, it’s obviously not just me saying that.

Part of the reason iZombie is so great is that the series evenly courts genres – from drama to comedy to police procedural and beyond. Unlike other crime series that get dull and formulaic, the iZombie formula never gets old. It gets heavy at times but doesn’t lose its lighter side. And when things start to feel too familiar, the show mixes things up.

Every episode means a new brain and every new brain means a whole new side of Liv. Liv’s character is constantly challenged and developed with each new experience. It never feels old – and the season finale is a goddamn masterpiece that manages to pay tribute to the zombie genre without ever losing sight of the series’ unique feel.

Another reason that this season works so well is that it moves away from the general procedural elements and expands the storyline. Granted, the first season had its over-arching plotlines, too, but in the second season it really feels like something else entirely. Each character gets more attention and the story becomes less about Liv and more about the cast as a whole. Meanwhile it all slowly comes together in a most spectacular fashion.

Seriously, the season finale is awesome.

If the first season felt a bit too procedural and goofy at times, rest assured that while the second season doesn’t lose any of the charm and humor it certainly starts to earn its stripes. This season really hones in on what makes the series work and then expounds upon that exponentially. And while viewers start to get some answers to the show’s greater questions, the finale sets the stage from an absolutely game changing third season.

I was incredibly impressed by this series and, after watching it all over again for this review, I am probably even more in love with iZombie than ever before. Honestly, I don’t know how everyone isn’t watching this show right now. Yes, the premise is a little strange but it works in so many way.

So, let’s talk about the special features included in the Season 2 DVD box set. I’m going to be honest with you all and admit upfront that there aren’t many of them. If you’re like me and enjoy all the different making-of featurettes that often come on home releases of your favorite movies and television series, you may be a little disappointed. But never fear – the ones that are included are worth it.

I say that because the box set comes complete with deleted scenes on each disc. Deleted scenes are some of the coolest things ever in my opinion. I just love seeing how things could have been or seeing what scenes just don’t make the cut. The formatting for the deleted scenes on the iZombie Season 2 DVDs is a little unorthodox. Instead of being contained in one bonus feature section they are included on each disc.

This is actually kinda cool because you get a more immediate look at the deleted scenes for each set of episodes. There are between three and four on each disc. You can’t pick them individually so you have to watch through all of them in one go but it’s a nice conclusion to each disc. For those of us prone to binge watching, you can binge through four or five episodes, watch the deleted scenes, and then move on to the next round.

Besides the deleted scenes, there is one other special feature included in the box set – the 2015 San Diego Comic-Con panel. This is an amazing special feature and I love that more and more shows are including these panels on their home releases. So few people actually ever get to see these panels. While some of the video presentations may be shared eventually, the panels still retain some exclusivity. After all, the biggest rooms at SDCC only hold between 2,600 to 5,600 people. With SDCC badges getting harder and hard to purchase, releasing these panels is a great way to let fans get a little bit of that Comic-Con experience.

I do, however, recommend you watch the panel BEFORE watching the full season as the panel was held before the season premiered. It would have been nice is if they had also included their WonderCon panel, which happened just before the Season 2 finale. (We got to sit down with the cast and show runners and had an absolute blast.)

All in all, you can’t go wrong with picking up iZombie Season 2 on DVD. iZombie Season 2 hits shelves today in a myriad of formats – Digital HD from multiple vendors, blu-ray, and DVD. Sadly, neither the DVD or blu-ray release come with a Digital HD code.

And if you’ve missed out so far, you’re in luck! iZombie Season 1 was released almost a year ago on DVD, but it was just released on blu-ray today, too. It’s the perfect time to get started with the series. Or, if you are already a fan and have been waiting to catch up on the second season, it’s about time you get Season 2 on DVD to go along with the first one!

One thought on “DVD Review: iZombie Season 2 is Out Now on Digital HD and DVD!”