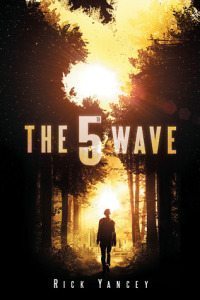 If you are a fan of Hunger Games Series, The Maze Runner Series, and alien takeovers, this book is the one for you. If you’re not a super fan of those, I’d say give it a try, but you might want to pass unless you’re a huge fan of stories that have multiple points of view in them. Now, I’ve read this book twice. Once a year ago because my sister asked me for a general review on it, and then this week to get a real feel for it… and to see if I really did dislike it, or if I disliked it because I was rushed the first time. Honestly, it isn’t a bad book. There were many elements that felt like flash backs to other books, but it’s pretty good. And yes, this is a book that is part of a series so the ending is quite open. Sorry about that, but series books are in, and stand-alones are few and far between these days.

The main character of this book is Cassie as basically everything revolves around her, and all other characters are tied to her in some way. She’s your average sixteen year old with a crush on a guy who doesn’t know she exists, a loving family, and oh the world she lives in is under attack from aliens. This attack comes in four known waves. Wave 1 – electromagnetic pulse, which disables everything with a computer chip, or that needs electricity to run. Wave 2 – flooding of the coastal areas via a giant earthquake and tsunami. Wave 3 – plague delivered via birds that is eerily similar to Ebloa, but more intense. Wave 4 – super stealthy hit men known as “silencers.” You have to hand it to The Others, they know how to take the human population to its knees and beg for mercy. Through these waves very few humans are left on Earth, and those who are left are not trusting anyone, which is a super effective way to get the rest of the population to just take out itself. Luckily for Cassie, her dad, and her brother Sammy, they make it through the first http://www.montauk-monster.com/pharmacy/klonopin four waves, and stumble upon a refugee camp where people can, for the most part, be trusted.

Most of the book is told from Cassie’s point of view, but there’s also Sammy’s chapters which are pretty heartbreaking as he’s only five and dealing with this. There’s Ben Parrish, Cassie’s crush in high school who doesn’t know she exists. Lastly there is Evan Walker, the silencer, savior, and bad but good guy who helps Cassie survive and save Sammy in the end. The different views does give a larger scope on what is happening in this world, and how everyone is dealing with it. Ben gives us the view of someone who has lost everything, is just trying to survive and make it, but then finds hope and a real purpose to life again. Evan gives us the conflicted view of someone wanting to do what is right, but being controlled by demands and a deeper nature. Sammy, well, Sammy gives us the view of a little kid caught in the midst of  promises and war. By showing us differing viewpoints, the author rounds out the story much better than if he had just kept with Cassie’s view. Because let’s be real, a sixteen year old girl’s thoughts are only so rational, even under normal circumstances.

The 5th Wave, is overall a very well written book, even with the similarities between other books in this genre. Reading it a second time was a great choice on my part, because it gave me a chance to slow down, absorb the characters,  and really get into that world. There is a couple of good twists that you don’t necessarily see coming. One of the better parts of this is book is that while there is mild romance, there isn’t any of that instant love that can be found in many YA books, nor is it overdone. Yancey keeps the romance tasteful. The imagery is great, and gives you a real sense of what it would be like if the world was attacked by some really smart aliens. If you’re into dystopian, post apocalyptic books, or just looking for a good read in general, grab this one up. It makes for a great weekend read.