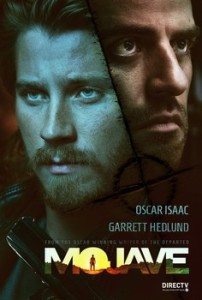 Mojave almost instantly feels like the film embodiment of the story of Icarus. It had some very ambitious and philosophical ideas, cushioned by namedropping every writer and artist from Shakespeare to Byron within verbose but vapid dialogue. Technically, it has all the makings of a potentially good thriller. Garrett Hedlund’s tortured artist/filmmaker Thomas meets Oscar Isaac’s homicidal serial killer Jack in the middle of the Mojave Desert.

The two of them have a good rapport but they almost immediately fall into a weighty conversation that, might look good on paper or perhaps in different hands, begins to turn the potential for a good movie into somewhat of a bore. Thomas and Jack become entangled together when the threat of Jack on Thomas’ life results in an accidental murder by Thomas.

It’s hard to pinpoint what exactly goes wrong in Mojave, whether it’s the wordy dialogue between the two well-acted leads, or the blatantly obvious “message” it tries to impart about Hollywood in the most unsympathetic and uninteresting way, or its attempt at intellectual discussion that lead to very little fruition.

Now, I enjoy a good story that makes you scratch your head. A story that makes you think, that makes you question, has achieved one of its goals outside of mere entertainment. But Mojave‘s issue isn’t that it doesn’t make you scratch your head, it’s that it doesn’t really make you want to think. The message is clear and it’s one that isn’t being told in any new way. The pokes and prods at Thomas’s excessive life and infamous status within the industry and Jack’s zealous anti-establishment manifest are shallow. It’s an old lesson and an old commentary.

There are a couple moments that do show a glimmer of the honest heart of the film, but it doesn’t lie within the story but rather with the leads. As far as I’m concerned this could have been a two man story in the desert, and we could have been spared Mark Wahlberg playing a bombastic version of himself. Walton Goggins and Fran Kranz are little more than cameos, while Louise Bourgoin is just boring.

In the scenes when Hedlund and Isaac are allowed to play off each other, they manage to cut through some of the pedantic speech and work off of their enigmatic chemistry. Both are able to play the menace and it’s actually quite enjoyable. Their meeting at a diner, after leaving the desert behind and coming back to the real world was a high point in the film that was never quite matched afterwards.

Final Thoughts: It’s grandiloquent and pseudo-philosophical. Oscar Isaac and Garrett Hedlund do a good job with what they’re given, but it’s not enough to redeem this story that crawls off without much impact, making it completely unthrilling and basically forgettable.