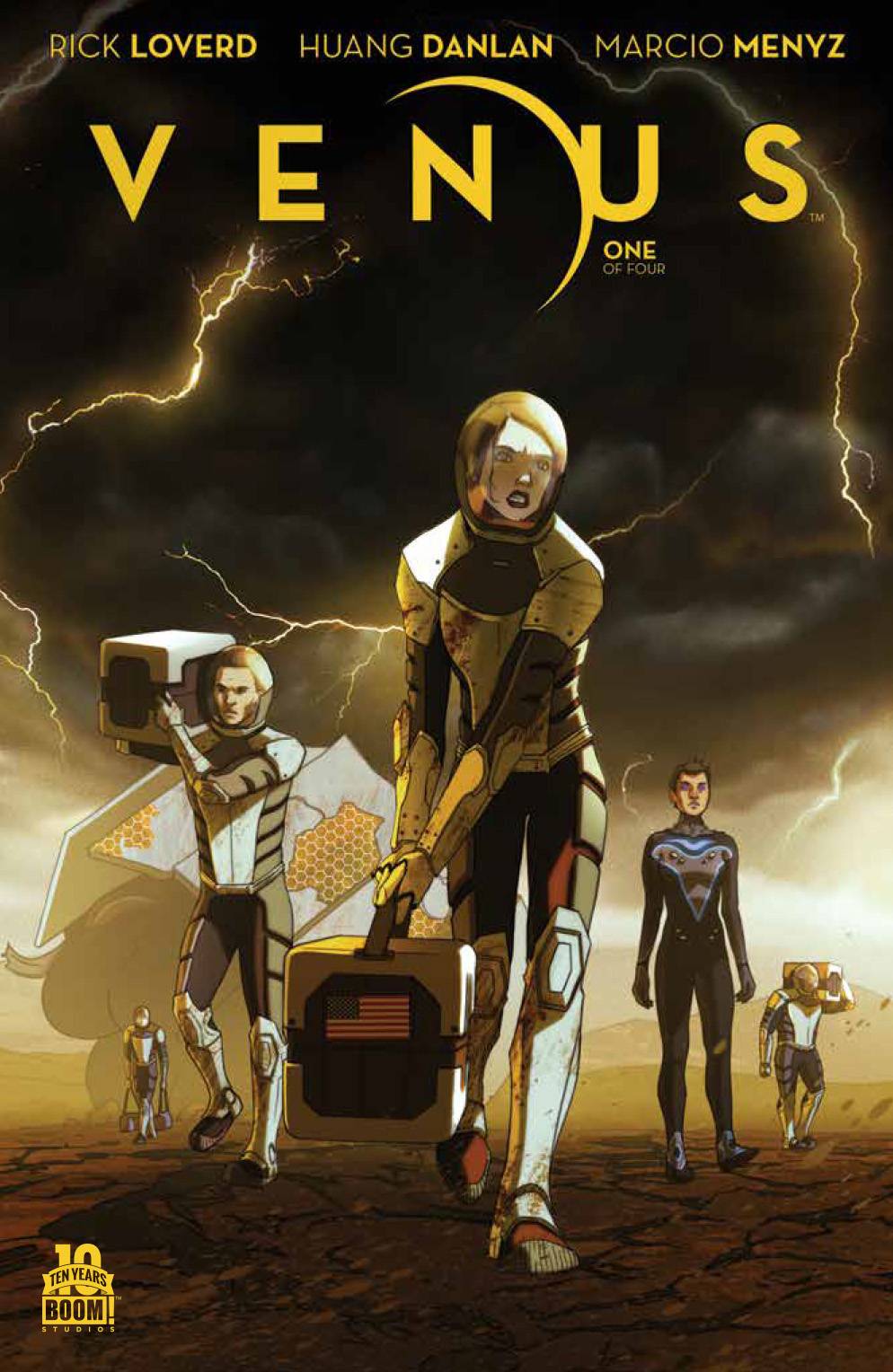 I love the basic premise behind BOOM! Studios’ latest sci-fi offering Venus. We’ve been graced with numerous new sci-fi comic series from the various smaller publishers and, in turn, we’ve seen some pretty awesome stories being told. Venus – despite being such a short miniseries – promised to be a yet another great title. As much as I like the premise, though, the book failed to really grip me with it’s first issue. Considering the book is only four issues long, that doesn’t necessarily bode well for the story being told.

Don’t get me wrong here. Like I said, the premise is great.

The series is set in a future where China and it’s Pan Pacific Alliance have colonized Mars and the United States have determined to make Venus their own. Unfortunately, Venus is hardly a hospitable landscape and, despite the crew of the Mayflower’s best intentions, the mission seems doomed from the start.

The book kicks off with a rousing speech that would have made Bill Pullman’s President Whitmore proud. But the inspiring speech is laid against the background of tragedy as the Mayflower plummets to Venus‘s surface as the captain and a few others are killed. It’s a strong start that starts you wondering what’s going to come next. The title of this particular issue is “Saboteur” so that sets the stage for the series’ primary conflict. But more immediately the surviving members of the crew need to figure out how to get to Augustine – their intended permanent home. Commander  Manashe starts trying to sort out a plan to move things along.

Unfortunately – after the strong start – this is where the book really starts to lag.

We get more of a story set up than a character set up and that’s always a problem I have with short series. With only four issues in which to engage readers, Venus focuses too much on the technical aspects of the story. The ship is screwed and they need to get to Augustine. That’s all I needed to know. The bulk of the issue should have been used to give us more information about Manashe, the inevitable conflict between her and military-minded Reyes, and the rest of the crew.

Survival is going to be a major focus of this series. At the end of this current issue the survival of the crew is placed in very serious jeopardy. But I didn’t really care. Yes, it was a big plot twist. I want to know what’s going on. But after seeing one guy die very violently and suddenly, and despite knowing another is injured, I really don’t care who they are or what happens to them. For me, that’s a problem. I want to care about the characters and at the moment I’m not sure that I do.

Now, the next issues could give us more information about the characters. We could develop a stronger bond with them while also looking into the mysteries of what happened to Augustine and what happened to the Mayflower. I hope that we do. I want to know what’s going on. I just also want the characters to be more than expendable plot points.

Over all, Venus is a series I’ll keep reading because it’s a short commitment. I feel confident that in the end we’ll walk away from the series with a full, completed story if nothing else. And it’s a good looking book. The artwork fits the world building and story. The gruesome death of the previous captain of the Mayflower is disturbingly well illustrated in particular.

We’ll have to watch and see where this one goes before I can make a final decision on the series. Venus #1 hasn’t gotten me excited but if we can pick up some of the character development as we move forward it could certainly get me there.

A REVIEW COPY OF VENUS #1 WAS PROVIDED BY THE PUBLISHER IN EXCHANGE FOR A FAIR AND HONEST REVIEW. NERDOPHILES WAS IN NO WAY COMPENSATED FOR THIS REVIEW. OUR OPINIONS ARE OURS AND OURS ALONE.