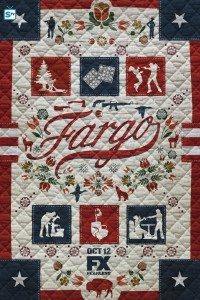 In all the centuries of crime fiction, there may have never been a stranger concept for a gangster drama than Fargo Season Two. It has the familiar elements of turf wars and familial complications but carries with it something different. Something stranger. It’s not the mysterious UFOs that lurk around the edges of the story. It’s not Fargo’s liberal applications of free-wheeling framing devices and visual trickery. It’s not even Fargo’s status as a fictional true crime drama (other Fargos have blazed that trail previously). No, the strange but key element that diversifies Fargo from its predecessors is that the central conflict boils down to the encroaching power of Wal-Mart.

The show’s second season* turns the plains of Minnesota and the Dakotas circa 1974 into a killing field where Wal-Mart unleashed its true power. For many years, the Gerhardt clan has dominated crime in the North, a small, family business with good values and personal service. When the head of the family has a terrible stroke, the reigns of the criminal dynasty fall to his wife, Floyd (Jean Smart).

With a theatre company of family members to oversee (each with their corresponding flaws and ways of complicating matters for Floyd), she must stand up as the Kansas City Mafia blows into town. Represented with eloquent glee by Mike Milligan (Bokeem Woodbine, in the kind of turn that stars are made of), KC wants to extend its grasp to the flush territory of Minnesota, seemingly solely to see its empire grow. Gentrification is the name of the game.

*It’s an anthology. Each season introduces a setting and cast of characters.

Entering the fray are Ed and Peggy Blumquist (Jesse Plemons and Kirsten Dunst), a butcher and a hairdresser who may have started this whole conflict. After accidentally taking out one of the key players with her car, Peggy ropes Ed into the world of criminal excitement for reasons that only become clearer (and sadder) as the season rolls on.

Bound by duty to respond to all of this is the local police, who aren’t quite used to this level of carnage. Luckily for them, they have a pair of real winners on their side. Lou Solverson (Patrick Wilson) is the man for any job, a cunning state trooper with a relentless ambition and sense of duty, a wife at home ailing from cancer, and a name familiar to fans of Fargo’s first season. You may also recognize his daughter as a law officer last year who may have picked up more than a few of these traits from her father. At Lou’s side is his father-in-law Hank (Ted Danson), the sheriff of Luverne, Minnesota who shares his surrogate son’s determination to see this crime drama solved.

You may also recognize his daughter as a law officer last year who may have picked up more than a few of these traits from her father. At Lou’s side is his father-in-law Hank (Ted Danson), the sheriff of Luverne, Minnesota who shares his surrogate son’s determination to see this crime drama solved.

That’s a lot of moving pieces and some of my favorites didn’t even make the list. Plus, there might be aliens. And Reagan. It is this incredible set of (perhaps too many) compelling pieces that makes the second season of Fargo the beautiful, mixed-bag experience it is.

Showrunner Noah Hawley and his small band of writers enter their sophomore year with the impressive swagger of a professional athlete fresh off a championship victory. The year before, they had done the impossible: taken a neo-classic Coen Brothers film from 1996 and transformed it into some of the best television around, even daring to play with the form and expectation along the way (there was a one-year time jump in the middle of the eighth episode).

Now that they’ve written the playbook, Hawley isn’t content to simply take from it again. He has to rewrite it, throw the whole thing out and start anew. “Double the ensemble!” he said. “Add consistent use of split screen to reflect the visuals of 70s cinema! Continue to defy expectations at every turn! For better or worse!”

Last season’s finale “Morton’s Fork” seemed more interested in ensuring that the audience would never know what was coming next than anything else. What remained was a toss-up: a final episode full of surprises that exchanged emotional catharsis for surprise. In that moment, Fargo asked you to question if the ending you wanted was truly the best result, and if you only wanted it because you think you know how stories end, oh ye mighty watcher of television.

Fargo carried this concept over into its next “true crime” story and made it the point. Absurdity is the name of the game. Each episode is named after either a bizarre real-world instance or a noted piece from the Theatre of the Absurd. Plot points are left in the dust when they are no longer useful. Key characters are dispatched of by characters who are far from their most dramatically perfect murderers. The whole experiment has the otherworldly insanity of those “million to one shot, Doc” stories we tell. It’s pure happenstance, perhaps more accurate to our own experiences than the taught dramatic structure of other stories we’re told, if not as cathartic.

It is defying expectation at the expense of pure emotion in a way that keeps Fargo constantly compelling but will always keep it a few steps removed from my coveted Personal Favorite slot. Fargo will always keep me riveted, expectations be damned, but will slide just under pieces of companion excellence like Hannibal or Rick & Morty when all is said and done. It is Fargo’s station in life, and it wears that badge so well.

All the staples that have come to define Fargo as a property are on display here: the brisk, wintery landscape of Minnesota; the playful accents laid in opposition to the grisly violence; its “true crime” nature; its inherent love of domesticity; the best of humanity facing off against the worst of humanity as the worst of humanity tears itself apart; and, perhaps most importantly and at its center, the meek ne’er-do-well at its center unhappy with their station in life. There is always a Jerry Lundegaard. Last year, Lester Nygaard proved to be a direct retaliation to Walter White. He was the seemingly nice, put-upon white dude who is pushed too far and retaliates, proving to have been a secret criminal genius the entire time.

But unlike Walter, we are never asked to root for Lester. He is a vile, despicable excuse for a human who cares nothing for those around him. He destroys what he touches. He ruins lives. Both Fargo the film and Fargo the show know that we are not supposed to root for this guy. The second season of Fargo shatters the mold by asking us to root for the root of all evil.

This season’s Jerry is Peggy Blumquist. Peggy is a hairdresser. She’s married to a nice, dull guy who loves her a whole lot. She has a nice house and there’s talk of Ed buying the butcher shop to give them a better life. She has friends and plants her roots in a perfectly nice place to live. And she’s miserable. She feels forced through the bottleneck of placidity, caught in the stranglehold of Minnesota Nice. She dreams of living it big in Hollywood.

Gender norms keep her locked firmly in place as a wife, homemaker, and eventual mother of many in the same way that the Gerhardt’s hired gun Hanzee (Zahn McClarnon) feels overwhelmed by the trappings of being a Native American. When opportunity stumbles in front of her car, she throws herself into the life of a criminal mastermind with reckless abandon, and pulls Ed down with her for good measure.

In Season Two, Fargo made the conscious choice to bring the social issues of our time to the forefront of its story. The role trappings for both Peggy and Hanzee are overwhelming and are enough to drive one mad. They do. As the actions of the two grow bigger and bolder over the course of the season, we continue to understand them even as we lose touch with them. We can’t support their end game, but we support their reason for starting the game at all.

What makes Fargo all the greater is that its protagonist just doesn’t get it. Lou Solverson is a great guy, a loving husband, and a damn fine cop. But he’s a guy that doesn’t get it. At times throughout the season, he says things that make him part of the problem for these two. He dismisses Peggy’s rationale and makes a particular crack about Hanzee’s race that makes him a true Man of 1974. It’s as delicate a balance for Lou as it is for Peggy and Hanzee, to keep us on his side even as we know he’s never going to be the Perfect Man of Equality we wish our heroes to be.

Noah Hawley makes a few decisions along the way to keep the affair from becoming “preachy” or “that show about issues” that may also leave you questioning where exactly we stand on these issues, but it is always great to see messages of social importance brought up on something as popular and well-received as Fargo. Like Jessica Jones before it, Fargo is great storytelling with enough positive social commentary to get people thinking.

Fargo is a unique television experience in a time where that phrase can also belong to a dozen other shows. It tossed of its Coen shackles long ago, although still making many distracting references to the brothers’ works along the way (there are particularly large shout-outs to Miller’s Crossing and Raising Arizona this season that took me straight out of the show; I like my dramas non-referential sosueme).

Wonderful in its approach and performance, thoughtful and sometimes confounding in its payoff, Fargo continually leaves its mark as being one of television’s premiere programs, a top-of-the-heaper among heap-toppers. Endlessly quotable. Breathlessly daring. Always Fargo.