Answers and Intrigue Guaranteed – No Questions Asked in ‘Mystery Girl #1’ 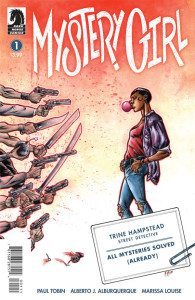 In a twist on the classic detective story, Trine Hampstead already has all of the answers to the mysteries – the catch is that no one can ask her any questions about how she knows the answers or what happened to her in the last ten years. Readers are brought into an average day in Trine’s life, where she sets up on the sidewalks of London, lounging around and answering the questions of passersby. It’s an interesting premise that feels a little bit like it wasn’t fully fleshed out before going to print.

The characters we meet in the first issue all expound upon Trine’s powers, but they all seem to showcase the exact same aspects of it over and over again. Regardless of their repetition, each character does have a distinctive voice and personality, even if their distinguishing features get lost in the artwork.

It’s unfortunate and distracting that many of the characters, females especially, are bent and contorted into some distractingly unrealistic poses. At its most jarring, a female is drawn mid-whine at Trine, leaned forward, arms thrown wide, ass pushed out behind her. Multiple aerial angles and birds that break the traditional framing make for some interesting shots.

One aspect of the art that I did enjoy is that there is so much movement, while there’s no particular reason we need to know Trine’s in London (at least not yet?), that readers get the feeling of a busy city going on around the characters. Also, Albuquerque seems to grow more comfortable with the animal and nature sense that crop up towards the end of the first issue that almost, almost make me forgive the terrible human posing and expressions.

Trine seems content to live her life as a sidewalk detective until approached about a failed mystery expedition, which she demands to be a part of the actual investigating in payment for her knowledge. It’s revealed that somewhere Mammoths are roaming the Earth and Trine wants to get out of her everyday life to see them. An interesting aside as she gets ready to depart on her new adventure involves her talking to her (maybe?) boyfriend in one of the most real, poignant conversations I’ve seen in a comic lately.

Unfortunately, the figurative mustache-twirling, hand-wringing, comedic evil of the series wasn’t given the same down-to-earth treatment that Trine was introduced with. After a gruesome act of violence, carried out with aplomb, readers get their first look at the unnamed man when he urges a maid at the hotel to remember his face and the fact that he murdered someone in one of the rooms. That’s… about all that he does this issue. Nothing interesting to write home about, they’re after the same papers and mystery. Hopefully their paths cross sooner rather than later, or Tobin finds a way to make the villain less cartoonish in future issues.

As much as I made it sound like I didn’t enjoy the first issue of Mystery Girl, I really did. The little moments that had nothing to do with Trine and her mysterious knowledge – her relationship issues, the stagnancy of her life, her loneliness and aimlessness – were jarringly honest and I connected with them and her character deeply at those times. And come on! Mammoths? Yeah, I want to see what comes of Mammoths! What flaws I pointed out about the series’ first issue don’t outweigh how interesting Trine is and I’m on board for the next few issues to see how things turn out.