Was “Mockingjay Part 2” Everything We Wanted It To Be? 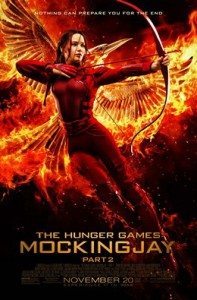 We’ve watched as Katniss Everdeen, a girl from District 12, battled against the tyranny of her dystopic world called Panem. From her sacrifice in volunteering on behalf of her younger sister, to fighting in two hunger games and surviving both, to joining the rebellion and becoming a symbol of hope for her people. Mockingjay Part 2 brings the exciting series to a roaring conclusion, and as a movie fan, the series end got as close to a fair ending as it could get.

Separating it from its book counterpart, as a person who never finished Collins’ series, Mockingjay Part 2 may not include all the details of the inspiration, but swells with the proper emotion that leaves the audience even more deeply invested, not only in Katniss, but the future of Panem. Part 2 picks up immediately where Part 1 left off but throws everything quickly into action.

What highlights the film is perhaps what has always been the highlight of the series. It plays on metaphors of war and leadership and sacrifice that are so familiar yet always evolving. As age-old as some of the lessons are, the series’ personal take on the ravages of war and the hunger for power and tyranny elevate the now-painfully-familiar story about a dystopian world in turmoil.

Additionally, Jennifer Lawrence’s performance as the leading protagonist continues to soar as she plays the standoffish young girl who is thrown into conflict and forced to become a leader. The Katniss of the books was always distant for me, she was very unlikable in the beginning and a difficult protagonist to root for at times, but Lawrences’ nuanced approach to Katniss leaves a vulnerability and heroism that rings true to the viewers.

The shift from Part 1 which was essentially exposition for the finale is overt. The stage has been set and the old formula that made the first installment of the series so poignant is back. Turning all of the capitol into a veritable hunger games not only adds the element of suspense and action, it pushes the story forward with continuing conflict that is more than just politics and veiled threats.

Unlike the previous games, there is more on the line than just one person’s life. There is the fate of their entire world. It’s not just self sacrifice but also the rewriting of the rulebooks. Undoing humanities wrongs, at least for a while. The film calls back themes from previous films, and with an swelling score that frames important scenes there is hardly a single scene that feels unnecessary in the telling of the tale.

Although there are some heartbreaks, the ultimate finale ends strong. The message ends on a high as it should. The Hunger Games was written for an audience in their formative years. At that age, we all need stories that have true conflict and adversity but ultimately inspire hope. Mockingjay Part 2 stays true to that, and is the perfect bookend to this enjoyable and successful series.

Final Thoughts: Mockingjay Part 2 brings a solid conclusion to a riveting series, with a wonderfully suspenseful buildup and a solid end that is sure to satisfy.