“The Night Before” Goes Big Or Goes Ho-Ho-Home 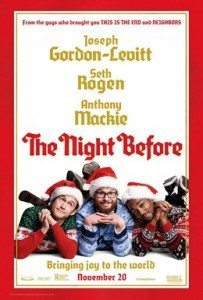 When I left my screening of The Night Before, I wanted to party. I felt like roping together all my best friends, painting the town, doing too many drugs, dancing all night, and waking up days later with no memory of any of it. But I also felt so hyped for Christmas, for decorating trees and giving thoughtful gifts and singing carols and quietly enjoying the company of my family. I’ll give it to The Night Before: I’ve never seen another movie that’s made me so pumped up and so cozy simultaneously.

Such is the way of the film, which attempts to subvert the formula of a typical wholesome holiday film in favor of raunchy R-rated drug-fueled exploits, while also using the exact tropes it sets out to avoid, sometimes in parody, sometimes at face value. At times it feels like a contradiction, but the film doesn’t have any sort of agenda with its approach other than to act as a vehicle for the comedy, which it does handily.

The film begins with a flashback explaining that fourteen years earlier, Ethan’s (Joseph Gordon-Levitt) parents passed away on Christmas Eve, so his friends Isaac (Seth Rogen) and Chris (Anthony Mackie) took him out partying to forget his troubles. This became a tradition, but today, Isaac’s an expecting father and Chris is a major football star, so realizing their drunken antics were becoming impractical, they declare this the final year. And just in time, Ethan finds three tickets to the Nutcracker Ball, the Holy Grail of NYC holiday parties that has eluded them for years on end.

The various kickers: wanting to let him relax and have a good time, Isaac’s wife gives him an early Christmas gift of nearly every drug imaginable, which predictably goes very badly very quickly. One of Chris’s famous NFL friends asks him to bring weed to the party, which proves more difficult than expected. And at one of the first stops of the night, Ethan runs into the ex-girlfriend he’s been trying (and failing) to get over for months. Cue antics.

These Apatow-type films tend to run with the same handful of actors, so given the only genre staple in appearance is Rogen (in fact, this might be Mackie’s first comedic role ever), the group possesses a surprising chemistry, and it’s not difficult to buy into the close bond they claim to have. They all work best when they’re in a group and they have the chance to play off each other, especially when things go sour between them late in the film.

On their own, they rarely break beyond their CliffsNotes descriptions: Ethan misses his ex, still hasn’t totally gotten over his parents’ death, and is generally a loser; Chris maintains a constant social media presence, can’t get enough of his fame, and uses steroids; Isaac is afraid of fatherhood and is on drugs. The conversations between them mainly tackle this same issue from various angles and you won’t learn much about these characters by the end of the film that you don’t already know in the first 20 minutes. And for a movie that establishes a relatively grounded tone, too often it pushes the limits of believably, either with a particularly absurd joke or a far-too-convenient coincidence.

But in this kind of movie, none of that matters as long as it’s funny, and I’ll be damned in The Night Before isn’t pretty damn hilarious. Rogen’s the clear standout here, who basically does nothing but trip outrageously hard on various substances for the entire film and yet remains incredibly entertaining in doing so, tackling the various forms of high behavior with full intensity. His bits tend to be the best, especially when combined with his wife Betsy (Jillian Bell), the most honest and multidimensional character in the film.

The film manages to juggle the mostly unrelated arcs of the three protagonists without ever losing focus, letting the bits both stand on their own and bleed into one another. Plus there’s Michael Shannon’s wonderful role as the gang’s enigmatic but intensely creepy weed dealer, not to mention a few great surprises once the gang finally makes it to the party. All together, The Night Before probably won’t enter rotation as a classic Christmas film, but it provides a hell of a good time while it lasts.

Final Thoughts: Despite the shallow characters, some big laughs and a stellar performance from Seth Rogen make The Night Before worth the while.