Lois Lane is the Real Hero in Gwenda Bond’s “Fallout” 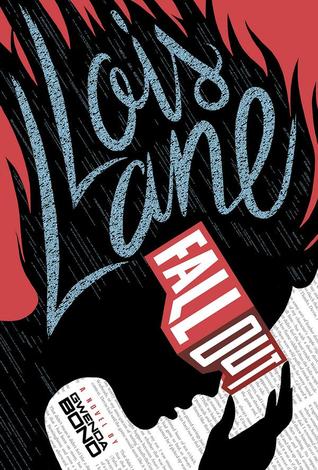 I’m going to admit something to you all up front here: I did not expect to like this book at all.

I sincerely mean that. I did not expect to enjoy this book and really thought I would give up just a couple of chapters in… Instead, I read the book in one sitting from cover to cover. After Marvel’s terrible chick lit books I guess I just figured that any trendy girl power novelization was going to be terrible. And that was an unfair assumption to make about Lois Lane: Fallout.

Because it was amazing.

I don’t say that lightly. You don’t see a whole lot of books getting five star ratings from me but this one absolutely earned all five.

Set well before Clark Kent donned the cape, Fallout starts off with Lois Lane arriving in Metropolis with her family for the very first time. She’s a hardcore army brat and proud of it. And this move is going to be different. This time she’s going to stay out of trouble, make friends, and fit in.

Of course, that determination lasts her all of about a day.

She finds herself wrapped up in a very strange mystery plaguing the school. Kids who get approved for a special ‘independent study’ start acting strangely – losing interest in things they used to love and ignoring their friends and family members. Lois teams up with some of the other kids in the Daily Bugle’s high school internship program – and with a little help from an online friend from a rural Kansas town – dives head first into the first real adventure of what will be an incredible life.

The greatest thing about this book is that it’s really Lois’s story. Even if there was no obvious Superman tie-in this is the kind of story that stands on it’s own. Readers would enjoy it anyway and root for Lois because she’s just that awesome. She’s smart and spunky and seems to find trouble wherever she goes. But she also knows how to deal with that. Lois isn’t the kind of girl who needs saving. She’s the one who is going to do the saving.

Yes, this book is a Superman tie-in and it doesn’t try to pretend that it’s not.

Clark Kent actually does appear in the book but his appearances are brief and largely inconsequential. Lois has known Clark for a couple of years as nothing more than a nameless online friend. They’re confidants but any time Lois tries to get close, Clark pulls away. This young, high school-age Clark hasn’t embraced his destiny yet and is much more interested in staying hidden. But for Lois? He might just bend some rules. It’s such a cute relationship that you can easily forgive the fact that it doesn’t fit with pre-existing canon.

Let’s actually get that out of the way here.

If you’re expecting this book to conform to any established canon you’ll be disappointed. Fallout appears to be it’s own story. And that’s fine! It modernizes the Superman story and brings Lois and Clark into the the near future as teenagers growing up in an era of computers and advanced technology. None of it feels out of place. It all pieces together seamlessly.

I’m going to start gushing pretty soon if I don’t wrap this up. Let me just end this review by saying that Gwenda Bond did a fantastic job with Lois Lane and this book. I cannot wait for the sequels. Seriously, this is now one of my top young adult series of all time. I know it’s a young adult book but it’s the perfect girl power read for anyone – teen or adult alike. You guys really need to read it.