The Autobiography of
James T. Kirk 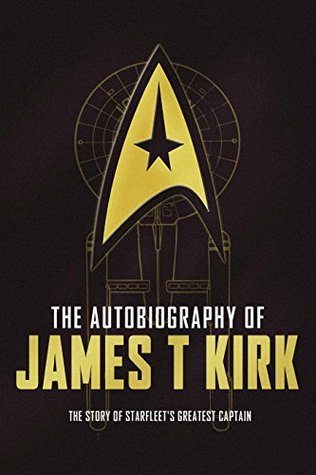 Looking for the perfect holiday gift for the Trek fan in your life?

The Autobiography of James T. Kirk is a fantastic book that old school fans should truly enjoy. And I mean old school fans. I love the new movies, too, but this is a book that can be best appreciated by people who grew up with the various Star Trek series and who have fond memories of James Kirk’s tenure as the Captain of the USS Enterprise. As the subtitle states: this is the story of Starfleet’s greatest captain. The original timeline is alive and well here.

Written in first person, the book holds itself out as Kirk’s actual autobiography – a project he started on shortly before his reported death aboard the USS Enterprise-B in Star Trek: Genesis. It features a foreword written by Dr. McCoy and an afterword by Spock with both sections written in that particular character’s distinctive voice. The rest of the book, though, is all Kirk.

It’s an incredibly fun read because Kirk is a great storyteller.

I know, it’s really David A. Goodman telling the story but it really does feel like Kirk. He captures the character perfectly. It doesn’t matter whether or not Kirk is running for his life, loving his command, or agonizing over the tragedies that unfortunately littered his life. This is Kirk through and through.

Many of the stories that are told we are already familiar with because we’ve watched them on television or we’ve seen the movies. But we get to see them again, this time through Kirk’s eyes. We learn more about Kirk’s family and his childhood. We learn more about his days at Starfleet Academy and his quick ascent through the ranks.

And most interesting for me, we see his relationships with various characters evolve. From McCoy to Spock to the rest of the crew, we see how much Kirk reveres them and how he feels about him over the years. We also see with Carol Marcus grow and fall apart and how Kirk deals with knowing he has a son whose life he’ll never be included in – something I had honestly always wondered about.

One of the neat little add-ons to the book is a center section full of photos, letters, and other images. It’s the same sort of thing you would expect find in basically any non-fiction book you might come across. Of course, these are all fictional. But they’re great nonetheless. From a picture of Kirk at the Academy to a letter he wrote but never sent to an eight year old David Marcus, these physical pieces of evidence add an extra dimension to an already fascinating read.

I grew up on The Original Series and I loved every moment of this book. While I love what JJ Abrams has done for the franchise, it was nice to take a step back and relive some of the classic moments I remembered from my childhood and to revisit Shatner’s Kirk. This is the Kirk who set the bar for science fiction on television for decades to come. I definitely recommend it to any old school Star Trek fan looking for a fun read.

A review copy of The Autobiography of James T. Kirk was provided by the publisher in exchange for a fair and honest review. Nerdophiles was in no way compensated for this review. Our opinions are ours and ours alone.