“I Hate Fairyland #1” Really Hates Fairytales & Suffers For It

There’s no more important or misquoted line in American cinema than “I’ve got a feeling we’re not in Kansas anymore, Toto.” This is at least partially because, “Frankly my dear, I don’t give a damn” is sort of a terrible line saved by great delivery but it’s more about how important the line is in the way we view the transformative power in cinema. Dorothy’s arrival in Oz in The Wizard of Oz is a celebration of the mind-expanding power of imagination and the way cinema can blossom that passion. Dorothy isn’t only in a whole new world when she awakens, but as color fills the screen, realizes she’ll never entirely see the world the same way again. Yes, Oz is frightening and a little strange, but it is new, pure and untouched by the sadness of home, something she can’t entirely run from, regardless of how much she needs to get back to the farm. 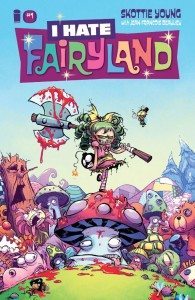 Writer and artist Skottie Young’s first creator-owned series I Hate Fairyland wants to have the same transformative, paradigm shifting power of Oz’s opening but it fails on so many levels. I Hate Fairyland #1 tells the story of Gertie, a young girl who wishes for the fantastic and is whisked away to Fairyland. As she arrives, her first reaction is terror. She screams, “I don’t want to die!” as she plummets towards the earth and as she strikes, a grisly mass of blood and broken bones, she’s less than enthused by the fantastic residents of the new world she’s found. She’s sent on her way by Queen Claudia, a Glenda analogue, and with Larrigon, the magic cricket in tow, she begins the journey home.

Things, of course, do not work out her way. Young doesn’t provide a lot of details, either in text or in his detailed, cartoony art, about how far Gertie is in her quest, but she’s clearly lost hope, faith and her humanity in the 27 years she’s been stuck in Fairyland. Gertie is a homicidal maniac, murdering sentient stars, eating toadstool guards and choking a Jabba the Hutt-esque slug with his Flava Flav-style medallion. It’s incredibly hard to root for Gertie. Young seems to think simply rendering the issue’s violence in a Chuck Jones homage but it doesn’t entirely work and a lot of that has to do with the tone, a sneering disdain for the genre Young seems to be paying at least partial homage to.

The comic I Hate Fairyland most reminds me of is Mark Millar and John Romita Jr.’s Kickass. Both comics want to use the language of the mediums they reference, fairytales and superhero comics respectively, but only reference those genres when they’re pointing a finger and laughing. Millar’s script for Kickass reads as if it was written by a high school bully, knocking kids into lockers for reading comics, while he keeps obsessive track of Marvel movies at home. Young’s, here is only marginally better, at least partially because it lacks the toxic misogyny and misanthropy that makes Kickass one of the worst comics of all time.

I want I Hate Fairyland to succeed. Young has had a unique perspective on Marvel heroes in the past with his Little Marvel issues as well as his run on Rocket Raccoon, which took a frequently obscene anti-hero and made him fun and friendly enough that when he poked at the premise, it was still easy enough to laugh instead of groan. He’s also a proven talent with knowledge of the fairytale genre from his long run on The Wonderful Wizard of Oz. There’s hints here that Young could twist the premise and acknowledge what makes the genre so memorable and powerful but the first issue here isn’t a promising enough start to recommend for all readers. For now, diehard fans of Young are the only ones who should apply.