“The Intern” Provides Some Charms, But Ultimately Feels Empty 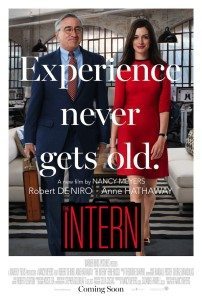 Despite any attempts to become a higher form of cinema, The Intern proves itself to be little more than a traditional feel-good “chick flick”. And sure, if that’s what you’re looking for, something where you’re not asked to think too hard (indeed if you do you might find more than just a few cracks in the surface of this film) then look no further for The Intern is for you.

The premise isn’t completely unfamiliar, especially after Vince Vaughn and Owen Wilson’s 2013 comedy The Internship, The Intern is about Ben Whittaker (Robert DeNiro) a retired widower who begins work at an e-commerce fashion start-up founded by Jules Ostin (Anne Hathaway) as a part of a community outreach program towards senior citizens.

As any teenager to twenty-something can tell you, explaining the facets of modern social networking and e-commerce to someone past the age of 50 is nothing short of speaking a completely foreign language to someone. Ben, while earnest and hard-working and essentially all things good, is woefully unskilled when it comes to his place within the start-up company called About the Fit.

Having once almost-worked for start-up company that was very similar to About the Fit, the trendy world depicted in The Intern is not as far from reality as you might think. There are more than just a handful of companies that hire super hipsters who work in repurposed factories with shiny Apple laptops and open work spaces where the dress code is always casual and their founder might cruise through the office on a vintage bike.

This new normal clashes with Ben’s traditional past, having once been a VP of a phonebook making company. Where old intermingles with new, we get a charming feel to an unconventional friendship that transcends age. Ben becomes Jules’s personal intern, and while Jules is initially against the idea, Ben’s charisma and genuine personality wins her over. There’s nothing wrong with DeNiro and Hathaway’s performance with the characters.

But where the story falls flat is how predictable it can be. Ben is a good guy whose worked a good life and while he feels a little outdated in his workplace, he’s become everyone’s uncle at work and faces little to no adversity throughout the film. His character gets never introspective, he is solely there to play off of Jules.

Jules, while having her own struggles in her life of being a working mom and the bread winner of her family, also seems virtually untouchable. There is no fear that her story won’t end exactly as you think it will and therefore it ends up feeling lacking. The trials she faces within the film are smoothed over before they can wrinkle.

Another irksome factor lies in the movie’s version of feminism, that seems to be hazy at best when arriving at the topic of gender politics. On one hand, Jules is the picture of a self-made woman who struggles with chauvinist CEOs – to be hired after her company’s investors deems her too inexperienced – who offhandedly call her successful company a “chick site”, on the other hand, she drunkenly confesses to her co-workers that she misses the era of Jack Nicholsons and Harrison Fords, and ultimately takes the advice of a man who opens his argument with “I hate to be the feminist here, but…”

Even in the scenes where Jules rants over the injustices that she sees in her position as a woman in a man’s world, Ben seems like he doesn’t know quite what to say or even if he agrees. It is a realistic reaction, but one that is never even touched on, despite it’s potential in adding depth to the relationship between the two.

Final Thoughts: The Intern is wholly entertaining, it tugs at the heart strings and is very much a feel-good film with an ending that leaves a warm feeling in your chest. But where it succeeds its charm and grace, it lacks in depth. The meat of the story can be summarized in a sentence and ends up feeling somewhat superficially emotional if not just plain predictable.