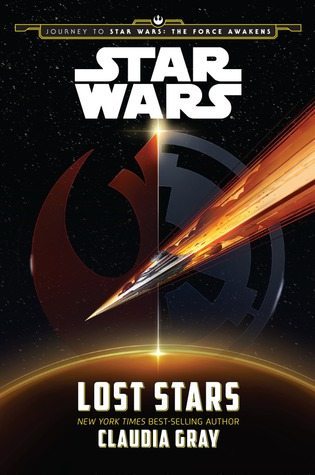 On Force Friday a number of books were released to continue the Star Wars story leading up to the release of The Force Awakens. Out of all of them it’s clear that Chuck Wendig’s Aftermath has gotten the most attention. After all, that’s the book that has been hyped as the first post-Return of the Jedi story in the new canon since the books in the old extended universe were purged.

But, if you ask me, Aftermath is not the book we should be talking about.

We should be talking about Claudia Gray’s Lost Stars.

Lost Stars is a stand-alone story encompassing the entire timeline of the original trilogy as well as a brief period before and afterward. Instead of following familiar characters, however, it tells the story two young people named Thane Kyrell and Ciena Ree as they find their way in a war-torn galaxy. They experience every major event you see in the films but this isn’t just a rehashing of those familiar events. They tell the story of the original trilogy from a new, unique perspective.

The author does a fantastic job of inventing her own story while fitting it seamlessly into the Star Wars narrative. And this is what I’ve always wanted from an original Star Wars story.

We’re shown such a narrow perspective in the films when when know that there are so many other characters out there with their own stories to tell. Claudia Gray embraces the opportunity to give us something new. She creates two interesting characters from a newly created, original planet and culture. Then she takes us through their lives from the first time they meet at eight years old until the period shortly after Return of the Jedi when they are well into their twenties.

They provide a refreshingly unique perspective on Star Wars, giving us insight on what it was like to be apart of the Empire when Alderaan was destroyed and how difficult it can be to balance duty with what is right. We meet new characters and old favorites in scenes that have real substance rather than coming off as merely fan service. We see the relationship between Thane and Ciena grow and evolve over years and insurmountable odds. It’s Star Wars but it’s more than that.

It’s a whole new story that goes deeper than we have seen before on screen.

Unfortunately, I know there has been some hesitation in reading this book by certain people in the Star Wars fandom. I guess I can understand that because it’s got a heavy emphasis on Thane and Ciena’s relationship. The book has been unfairly shoe-horned into the young adult genre. Yes, Claudia Gray is a young adult author.

But that really shouldn’t stop people from picking this book and reading it. The unique perspective, the fantastic tie-ins to the original films, and the information given on the state of the galaxy over a year after the Battle of Endor make this a must read for everyone interested in the new canon.

If you read one book from the new Star Wars canon it should be this one.