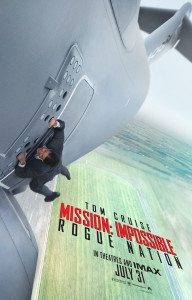 Tom Cruise is back as IMF agent Ethan Hunt in the latest Mission: Impossible installment Mission: Impossible – Rogue Nation. While this movie may not have really been on some of our summer’s to watch list, it’s not a surprise why the movie got high ratings. Standing tall with a resounding 93% from Rotten Tomatoes and 75 out of 100 from Metacritic, such ratings can be an anomaly amongst summer blockbusters. Mission: Impossible’s formula of enjoyable spy action and a sprinkling of light cheesy jokes, works.

Rogue Nation’s plot exposition can be a bit thin towards the beginning and end, but with any Mission: Impossible movie it’s about the mission and the reveal. This go around in Rogue Nation, Ethan and his team must take down the sinister face behind Syndicate – the menacing agency set out on destroying IMF. While, unfortunately, the whole crew of Ghost Protocol doesn’t return, favorites such as Jeremy Renner, Simon Pegg, and Ving Rhames reprise their roles as Ethan’s point men – Brandt, tech wizard – Benji, and recon master – Luther, respectively.

At the beginning of Rogue Nation, Ethan and IMF agents are branded by the CIA as part of a dysfunctional agency causing more harm than good, and now chasing the Syndicate, a group the CIA  believes exists only in Ethan’s mind.  Forced to disband, Ethan Hunt has to go “rogue,” while putting the pieces together with the help of a mysterious Isla Faust (Rebecca Ferguson). Although we know the band will inevitably get back together, the disbursement is a fun plot trope that allows the film to explore just why they depend on each other and how far they will go for each other. Thankfully, it’s all done well in time as the Syndicate’s ties are finally figured out. Except for maybe the first Mission: Impossible, the action sequences, not the plot, are the pride and joy of the franchise.  Rogue Nation delivers on that point with Tom Cruise’s very own plane stunt, dramatic fight sequences, thrilling motorcycle chases, breathtaking underwater stunts, and of course, pulling off fake identities. It’s the creative action sequences and sense that the movie doesn’t take itself too seriously, that has kept the franchise alive. Much in the vein of Tom Cruise’s self-deprecating role in Tropic Thunder, my favorite part of Rogue Nation is after Ethan has been revived from infiltrating a secure server underwater. Groggy from dying and being brought back alive by a defibrillator, Ethan and Benji chase after Isla. Ethan attempts to bound over the hood of the car but instead falls flat on his face. The action packed and peppered comedy formula is also most likely why Rogue Nation and Ghost Protocol ranked higher on the Rotten Tomatoes Tomatometer than their predecessors.

While the ratings and hype can set a high bar – make sure if you set out to see Mission: Impossible – Rogue Nation that you set your expectations realistically. Don’t walk into the movie expecting some great plot twist or deep story line. If you walk into the theater knowing that Rogue Nation is just supposed to be an entertaining spy flick, you won’t be disappointed and will understand why it’s been receiving all those thumbs up.