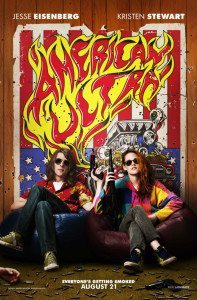 As far as stoner movies go, American Ultra isn’t rated at the top, but it’s still got some kick to it.

If you’re sitting down, looking for something like the meaning of life in American Ultra, you won’t find it. The film is a non-stop rollercoaster ride that doesn’t take itself too seriously. And that’s a good thing. Ultra does what I think other stoner movies haven’t done, and that is it doesn’t continuously (and somewhat annoyingly) linger on the subject of actually getting high. It’s those moments of “I’m getting high right now! That’s why I’m doing crazy things! Watch me blaze and kill some people at once!” that makes me roll my eyes a little. We get it, you’re baked. Can we move on?

The problem with most of those films is that getting high is half the story. And sure, it’s fun the first time and maybe even the second time, but the joke wears thin pretty quickly. Thankfully. Ultra doesn’t have enough time to linger on that fact when it’s got a plot that is working overtime to come to a conclusion.

The story itself, while not exactly repetitive, has enough aspects of other tales to where it might be struggling to be unique. Half spy movie, part stoner flick, and part romantic comedy, it’s an amalgamation. Character archetypes crop up left and right, and they are absurdly predictable but manage to be the most ridiculous version of themselves. Topher Grace’s CIA Agent Yates is a late-20’s yuppie with the desire to prove himself, he has managed to take control of the Ultra program from Connie Britton’s senior Agent Lasseter.

Their characters are rivals in the most obvious way, the younger Yates is trying to show off just how much he can bring to the table by taking Lasseter’s program and pumping it full of crazy (literally) and showing that he can succeed where she has failed. Of course, caught in the middle of this somewhat one-sided pissing contest is Jesse Eisenberg’s Mike Howell, Lasseter’s golden boy sleeper agent.

Social outcast and riddled with insecurities, the only good thing in Mike’s life is his girlfriend Phoebe Larson, played by Kristen Stewart. The two have a semi-typical romance (with a few plot twists) that resonates with the audience. Their main issue isn’t anything too complicated, it’s the inherent fear that they are holding the other back from reaching their full potential.

There is a scene in which they see a car that has crashed into a tree, and Mike likens himself to that tree, stuck in one place, while Phoebe is the car, always moving, only to crash into the tree and be rendered immobile. The allegory of the tree and the car is surprisingly elegant and plays into the narrative of Mike’s insecurities of holding Phoebe back and keeping her stuck in one place.

The chemistry between the two leads is convincing. For a spy movie about a stoner, it’s optimistically romantic. Eisenberg manages to fill the role of a quirky killing machine, and Stewart proves herself worthy while taking on an action role. But together, they are a sweet and charming couple. One that makes you believe that they not only care for one another, but despite all odds, are actually in love.

Although Eisenberg and Stewart dominate the screen as main characters, the visual effects and ultra violence is as much a main character as they are in the film. From blacklight fight scenes to violent fireworks displays, it’s non-stop and completely unrelenting. The fight sequences are incredibly enjoyable if you’re a lover of ultraviolence in films, and it is reminiscent of Dredd‘s colorful violent action sequences.

Topher Grace and Connie Britton are hilarious playing off one another, although Grace sometimes goes a little too over the top and Britton slips into a caricature at some points. Walton Goggins’ Laugher character stood out as a comical villain, but in a surprising final moment he gave endearing insight into his own character and the moral of the story.

Final Thoughts: If you’re looking for something that will leave you questioning the world as you know it while you sit in a quiet theater and listen to slow dialogue, don’t go watch American Ultra. Don’t go into a film like this expecting an existential epiphany, or any other epiphany of the sort. If you like to have fun, if you enjoy some violence with your action, if you like a nice spin on a spy movie, if you enjoy a good laugh and a cute romance, go see American Ultra.