Hex Hall Will Leave You Spellbound 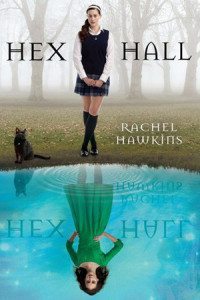 Hex Hall centers around misfit Sophie Mercer, a prodigium of the witch sort and all around typical teen. She’s sent to Hecate Hall for a few spells gone awry, and to have a chance to come into her powers and, you know, not screw up and put all of witch, fae, shapeshifter kind at risk. Sophie ends up rooming with Jenna, the outcast vampire of the school, and finds out that things are a lot weirder, and a lot more dangerous than they seem. Throughout the year she battles herself, her crush, the gorgeous three witches, and a ghost from her past.

This book is a super fun read. It’s entertaining, magical, and romantic in all the usual YA ways. I picked it up on a lark, because that cover is cool and the back sounded interesting. Let me tell you, it wrapped me up in it’s spell and held me there till the last word. Being the first in the series, naturally not everything ties up in a neat little bow, but you do get a nice sense of conclusion from the going-ons in this installment. The characters are likable, and come off as a bit Gilmore Girl in the humor. It’s hilarious in the way only snarky, dry humor can be. The writing is great, it’s a fun read that takes you to Hex Hall and helps you see the electric pink of the room, and the dankness of a seemingly forgotten Georgia manor.

Hawkins does a great job of giving us a magical read that isn’t too much like the typical vampire, witchy novels out these days. She takes the time to give the characters more personality focusing more on who they are versus what they are. It’s one I’d recommend for those who want to dip their toes into the world of supernatural books, but also want to keep a foot on the solid ground of fiction.

This book really grew on me as I read it. Hawkins does a great job of giving us a story that is interesting, funny, and charming to boot. Sure, it’s got the guy she’s just got to have, and the pretty girls who are just out to make her miserable, but that’s just side stories compared to the rest of it. By far one of the most fun reads of my summer, and I can’t wait to find the next books in the series.