The Epic History of NerdHQ at SDCC

My first time participating in San Diego Comic Con was in 2009. I’d recently graduated high school and the trip was a joint gift from my family members. It was one of the last years anyone was able to buy passes months before the event, only a couple years before passes began to sell out within an hour. While it was still a behemoth event, it was a shadow of what it has turned into.

One of the biggest shifts I noticed, between my 2009 trip and my return in 2013 was the number of activities located outside of the convention. In 2009, unless someone was over the age of 21 and could get invited to one of the parties, there wasn’t much to do outside of the convention. In 2013 all of that changed, and NerdHQ has been at the forefront of this shift ever since.

NerdHQ was stared by Zachary Levi not long after he established The Nerd Machine post-Chuck. The Nerd Machine was created as a space for geeks, nerds, and everything in between to gather online and talk about the various aspects of pop culture. It quickly established its own clothing line, and from there began to get into events.

It had its inaugural event at San Diego Comic Con in 2011. The event itself was small and open to anyone wanting to buy tickets. It was marketed to both those with passes and those without, and has rapidly increased in size and participation as the years have progressed. Moving from one location to another, it eventually settled into Petco Park where it has been for the last couple of years.

Part of what made NerdHQ unique, compared to the convention it paralleled, was its investment in providing a small, intimate venue for fans to connect with their favorite creators and actors. The fact Zachary Levi’s passion for charity was just icing on the cake, as all of the proceeds made from tickets sold to these intimate panels were donated directly to Operation Smile. “Conversations for a Cause,” as these small panels are called, bring roughly 200 people into a room to sit and ask those involved with their favorite shows questions for an hour. Seriously, all they do is bring everyone in, bring in the guest(s), and pass around a microphone. 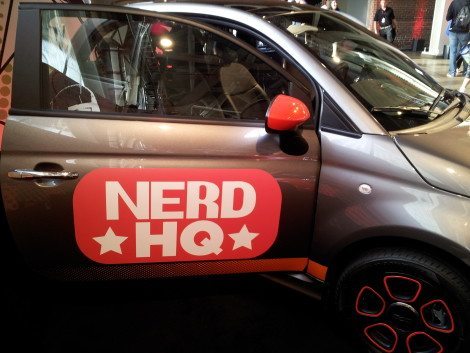 For those who can’t attend, since it is capped out at 200 attendees, the conversations are broadcast online for everyone else free of charge. If that wasn’t enough, there’s also the chance to get in on what’s called a “Smile for Smiles,” which is often an impromptu photo op where twenty dollars gets you a printed picture with your favorite celebrity.

On top of all of the events and panels, NerdHQ has also sought to create a space for fans to just hang out and have fun outside of the convention. NerdHQ in the past has been an oasis for tired con-goers who just needed a place to sit for a bit.

They often pair up with sponsors who will sponsor gaming demonstrations, drawings, and all sorts of other fun stuff that is completely free of charge. One of the best thing they offer? Charging stations for all your electronics! NerdHQ not only provides a cool space with the potential to brush elbows with some awesome celebrities and creators, but it goes so far as to offer a safe place to recharge both your body and your phone before diving back into the chaos that is San Diego Comic Con.

My own personal experience with NerdHQ in 2013 was a positive one, and I cannot recommend it enough for anyone who is looking to get away from the hustle and bustle of the convention. To be honest, I felt like I spent more time outside of the convention than in it that year, mostly due to places like NerdHQ. I had the chance to meet Zachary Levi, sat in separate conversations with Richard Madden and Tom Hiddleston, and met a lot of cool fans while hanging out on the way-too-comfortable couches. I felt safe, comfortable, and able to take a breather after a hectic convention schedule.

This year, NerdHQ will be celebrating its success by moving to a brand new venue. For San Diego Comic Con 2015, NerdHQ will be taking over The New Children’s museum in downtown San Diego. It will bring with it a host of new Conversations for a Cause, Smiles for Smiles, and no doubt a number of other surprises that will make it the perfect getaway from the chaos of the convention itself. I, personally, cannot recommend it enough and suggest everyone check it out if they’ve got downtime between con events.