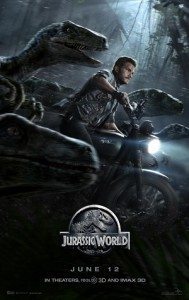 Dinosaurs are cool. Period. It’s one of the basic facts of the universe. And yet it’s remarkable that no other movies besides the Jurassic Park series have attempted to capitalize on this, unless you count kids movies like The Land Before Time and Pixar’s upcoming The Good Dinosaur. For that reason, it’s a lot harder to complain about an inundation of sequels and remakes when it comes to this particular franchise; we could maybe do with less carbon-copy superhero movies or bland horror remakes, but we haven’t seen a proper dinosaur on screen for nearly 15 years. So if you want that, you’ll get it out of Jurassic World – as long as you don’t expect much more than that.

In this installment in the franchise, Dr. Hammond’s dream has finally been realized and a fully-functional dinosaur theme park called Jurassic World now attracts thousands of eager tourists. Claire Dearing (Bryce Dallas Howard) works as the park operations manager, and her nephews Gray and Zach (Ty Simpkins and Nick Robinson) arrive on the island to visit her, but she’s busy preparing the park’s new attraction. After all, the park’s been around for around 20 years now, meaning an entire generation of children have grown up in a world where dinosaurs exist, and they’re looking for something new – so she and her team have genetically engineered a larger, smarter, generally “cooler” dinosaur primarily based on the T Rex. But when this monster escapes, it’s up to Velociraptor trainer Owen Grady (Chris Pratt) to get it back under control.

This new species, the Indominus Rex, is as terrifying as the film promises, with a creative and cool but reasonably believable design, and I applaud the film for taking its time in revealing the dinosaur in its entirety while not stretching it out to the boredom-inducing levels of last year’s Godzilla. In general, these are the best-looking dinosaurs ever depicted in a motion picture, using a blend of CG and animatronics to achieve nearly photo-realistic effects. Outside of one strangely dopey brontosaurus, you’ll find yourself marveling at the various species just like the guests do.

And the film also knows exactly how to use these dinosaurs to terrific effect. Maybe it’s the 3D IMAX talking, but some of the actions sequences are seat-grippingly thrilling, completely absorbing and consistently suspenseful. Unfortunately many of the film’s most creative scenes were spoiled already in the trailer – Owen riding his motorcyle alongside his trained Velociraptors, swarms of Pterosaurs attacking the park’s guests – so as engaging as the scenes may be, you won’t really be surprised by anything until the film’s climax. But that climax works so incredibly well, is so creatively choreographed and has so many small surprises that it’s absolutely worth the wait, and almost single-handedly earns the movie a rating as high as I’ve given it.

Because as fun as these parts may be, you’ll find almost nothing worth remembering in Jurassic World‘s story. The plot only serves to deliver the characters and the Indominus Rex through the various locations on the island, and throughout it asks you take some fairly significant leaps of faith in terms of your suspension of disbelief. In addition, so few of the characters manage to break out of their 2-dimensional archetypal roles. Owen is the straight-faced ex-Marine who impossibly never loses his cool or makes a wrong decision the entire movie; Claire is the business executive who only looks at the statistics and focus groups rather than the human element; Vic Hoskins (Vincent D’Onofrio) wants to turn the dinosaurs into a military weapon.

You’ve already seen these exact characters in movies like this over and over again. They’re all competently performed – Owen is Chris Pratt’s first role completely devoid of goofiness, and he pulls it off – but none of the performers contribute any real nuance, and the child actors in particular only achieve “good enough.” It’s what prevents this movie from being much more than a fun guilty pleasure summer blockbuster, even if it’s that in spades.

Final Thoughts: Jurassic World doesn’t contribute much in terms of theme or character to the franchise, but it delivers the most beautiful dinosaurs in film history and some thrilling action sequences.