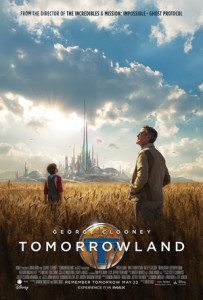 While not lacking in heart and soul, Tomorrowland was lacking something.

While Brad Bird’s inspirational story will be sure to stick with some younger viewers, the film oversold itself with a title like Tomorrowland. Trailers and promotions sold the film to be nothing short of a fantastical adventure into a living breathing version of Disney’s Tomorrowland theme park, however the delivery left much to be desired. Watching the film, I constantly felt like I was waiting for us to be transported into a world that Britt Robertson’s Casey only glimpses at.

It spends a lot of time building up and makes half of the movie feel like exposition, while the other half proves to be something similar to candy-coated disappointment. The message of the story is blared loud and clear, optimism and hope wins out in the end, and boy, is that message hammered into you. It is very much a Disney production, but somehow manages to lose some of the impact of a true Disney film.

Animated films like Up, Toy Story 3, and Frozen manage to appeal not only to a younger generation, but also the general audience of all ages with a heart-warming tale and a positive message. In comparison to its animated family, Tomorrowland lacks.

George Clooney’s Frank Walker, a grizzled pessimist, brings some gravitas to an otherwise light film, as does Hugh Laurie’s David Nix. Robertson’s Casey Newton bears an incredibly suffocating amount of optimism, and often challenged my belief of her brilliance when she seemed to repeatedly make the most basic of mistakes. Newcomer Raffey Cassidy does manage to shine through as Athena, and her chemistry with Clooney manages to exude from their scenes together.

The set design of the actual Tomorrowland is glimmering, bright, and beautiful, complete with all the gadgets you’d expect of a utopian, innovative future world. It would have been awesome to see Casey and Frank interact with the other citizens of that utopia, and watch them as they are immersed into the titular world. Unfortunately, on that front, the movie does not deliver.

Final Thoughts: While entertaining in some aspects, Tomorrowland falls flat in promising what it’s advertising, feeling more like concept art before a final film. Overflowing with optimism, it fails to feel genuine. The cast give their best, but this is not a film I would watch again.