Poltergeist Is A Totally Okay Movie 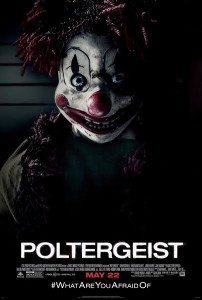 The original Poltergeist appeared in 1982 and with all movies nowadays, you need a sequel or a retelling because maybe Hollywood is running out of ideas. Anyway, the Bowen family want to start new and move to this quaint little neighborhood located next to giant power lines. They notice weird shit happening as soon as they walk into the house. Needless to say, as all “horror” films go, common sense goes out the window and the youngest, purest of the people becomes the victim.

Poltergeist, a totally ok movie. Right? I mean… It doesn’t do anything spectacular. It has a cast that are entirely adept at the whole acting game. Rockwell is Rockwelling it up, the deliverer of the majority of jokes (of which this movie has many), and Rosemarie DeWiit plays the lovely wife. For real. I love her. They have a brat of a high school daughter (Saxon Sharbino), a really mature looking young kid (Kyle Catlett), and the adorable youngin’ girl (Kennedi Clements).

This group of actors and actresses play the family in a realistic manner. In fact, their interactions which form the bulk of the first third of the movie is the best part of it. The story is, well, like what you saw before. Haunted house, scary tree, tv yadda yadda. yeah it’s all there. Scares? Well I mean, the first scare is a jump provided by a squirrel (who later turns demonic), leading to an ugly as sin clown (mmm more clowns, yay), and then the movie devolves into more of the same. I think that’s the problem with retelling a classic. At this point everything the original made fresh has been done to death and for the 2015 version to retread those same roads leaves much to be desired.

The ‘scariest’ moments are those jump scares unfortunately. After that the moments that should really be the stuff of nightmares are filtered through glorious (I’m being sarcastic here team) CGI. Nothing quite frightens the audience like ghouls made of play-doh. If you happen to be as fortunate as my showing you might get a real, true scream as an audience member startles their friend. Otherwise, this movie is definitely lacking in the scare department.

Pairing well with horror is the ever present comedic moments. In Poltergeist those moments are great, the jokes work and the audience laughs. But where the jokes are accomplished with total confidence, the scares stumble at the blocks, making you wonder whether or not they knew which direction to take the movie in.

Getting back to that CGI stuff. Boy howdy it ran the gamut. Some ideas were executed incredibly well, such as the use of ghostly lights flickering from bulbs into the youngest daughter’s closet forming some sort of alternate dimension gateway. This was one of the best parts of Poltergeist. It felt new to me as opposed to the generic ghouls we saw in Constantine way back in 2005, though I’d say the ghouls in Constantine were actually better CGI than these.

Now, as far as technology goes when it comes to the plot itself… Just get that shit outta here! I’m tired of paranormal investigators coming in and setting up shop in haunted houses! I know this is from the original, but if you can’t make something work then why remake it? They use more great actors in Jared Harris as Carrigan Burke, a TV exorcist personality but other than that? Just more dopey grad students, one of whom is seriously lacking in his job, and their professor Dr. Brooke Powell, played by Jane Adams (the former wife of Carrigan, again the source of some fun moments).

They join up with the family to create their own little techno-hive in the living room, because nothing makes a movie more scary and atmospheric than GPS, drones, and temperature monitors. Yeesh. As soon as it started I was immediately reminded of Insidious, a movie I did enjoy for the most part, yet Poltergeist went nowhere with it. Again, retreading the first and making it feel so unoriginal.

Speaking of things we’ve all seen before, who is this movie for? Who is the intended audience? Surely not folks who saw the original, they’ll be let down. And for 20 somethings who have a few haunted house movies under their belt this will seem like more of the same. No, surely the only possible audience are those who are just dipping their toes into the waters. Maybe parents and kids, or youngs teens just outta school ready to start looking for thrills (of which they may find one).

Final Thoughts: Poltergeist is a campy movie that tries to be a horror with not enough jokes to become a comedy. There were shining moments that stood out as unique (the whole other dimension and what not). It is not a scary movie because it goes to “boo!” tactics to get you startled. The ghouls are not frightening (if anything it looks like a computer game) and the only redeeming quality about this whole thing is the family. They jive very well together and as a unit they pull off the cohesive suburban family. The chemistry between the actors and actresses work and they make a believable family. Everything else cannot be taken seriously whatsoever and has little that makes this a “Must See.”

Poltergeist is the “scary” movie that kicks off an early summer for teenagers to go see. It’s timed perfectly with graduation so people can hang out and have a scare, before they go on their vacations. All in all it can be said that Poltergeist feels like a live-action Monster House, which is funny, or unfortunately unsurprising, because the director, Gil Kenan, directed Monster House too.