The Bellas are Back, but Pitch Perfect 2 Falls Flat 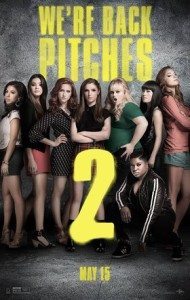 Full disclosure: I came into this movie with really high expectations. Pitch Perfect is one of my favorite comedies, and anything short of aca-mazing was not going to impress me.

With that being said, this movie tried to capitalize off the successes of the original, and while it came fairly close,  it still fell flat. I can’t pinpoint exactly what went wrong: all of the individual parts were there to mimic the success of the first movie – from getting the original cast to return to having the wondrous Elizabeth Banks in the director’s chair, the pieces were there for a fantastic film, but the heart just wasn’t.

I think the major problems with this movie were the lack of a compelling plot and the loss of chemistry between the cast members.

The Bellas have been hot off their success at the end of the last movie for the past three years of collegiate a cappella competition, winning Nationals ever year. They are the queens of campus, and their success culminates in a senior year performance for President Obama. Things go awry when Fat Amy (Rebel Wilson) has a wardrobe malfunction and exposes her Australian down under bits to the nation. Problem: the Barden Bellas are now banned from national competition.

The rest of the movie follows the Bellas as they try to get reinstated by the National A Cappella Foundation – which is contingent upon their win at the World Championship. And as Elizabeth Banks and her sexist male commentator companion informs the girls, no American team has ever won.

Because the rest of the world hates us.

After that, what follows is the Bellas’ attempt to scout the competition and rediscover their sound, all of which culminates in a face off with their new rival team, the scarily efficient, German “Das Sound Machine.”

Like the first movie, the sequel has the same riff-off and competition scenes, but we do miss out on another audition song compilation *cries*. Essentially the formula from the first movie is there, but this time it plays a little stale. This might be because the relationships between the girls don’t feel as close or as fragile as they were in the first movie. There is also no romantic tension between Beca and the male lead – the two are comfortably dating, just like the girls are all comfortably living together and winning national championships. There’s no drama, no conflict, and no major character development. The stakes didn’t feel real, and the relationships were never in jeopardy.

Sadly, even Bella-legacy Hailee Steinfeld cannot freshen up the gang’s camaraderie, and the new “Cups” wannabe (“Flashlight,” an original song) finale doesn’t live up to the hype.

However, what this movie does do extremely well, and what redeems the film, are its guest star surprises and its one-liners. If anything, this movie had wittier one-liners than its predecessor, even if they did feel more self-conscious. Banks and her co-commentator played off each other extremely well, as did his rampant, misogynistic shots at the Bellas.

One of my favorite moments in the movie was during the riff-off: I won’t spoil the reveal here, but one of the a cappella groups tackling the competition have members with very high-profile day jobs.

Speaking of celebrity guest stars, Kegan Michael-Key appears as Beca’s high-maintenance music-producer boss. One of the highlights of the movie was his interactions with his peons, at one point telling his employee to eat in the corner and stop saying hipster things.

Final Thoughts: Though this film doesn’t live up to the high bar Pitch Perfect set plot-wise, it is full of hilarious, highly quotable one-liners. Consider it mandatory viewing if you’re a fan of the original, or if you want to freshen up your repertoire of hilarious insults. Watch it when it comes out on DVD otherwise.