April’s Loot Crate: Fantasy! and What Convinced Me To Subscribe

As most all of you know, for surely I am behind the times when it comes to nerd-monthly-subscription-thingamajigs, Loot Crate brings a new batch of goodies under a different theme right to your door monthly. April’s theme was ‘Fantasy’ and it piqued my interest. Seeing friends post their stuff on the various social media month to month never quite provoked me into jumping on. I didn’t know what the real value of the crate was. Each of the themes had seemed less than promising. One month was ‘Villains’ and I said no, I’ve always been more of a hero guy. The next month was ‘Heroes’ and I thought, well that’s just so vague. And so it goes month to month with me hearing about deals from podcasts, to save a few bucks with the subscription but still I didn’t follow through. After all, did I really need more nerdy knick-knacks?

That changed this month. With the theme in mind I talked to a friend visiting town. I told him how I thought, that it seems cool but what if I end up getting a bunch of stuff I don’t care about? I mean there’s a lot of stuff that falls under Fantasy and not all of it is my cup of tea. What would I do with more junk? He replied with the single thing to tip me over the edge, “It’s not meant just for you, it’s meant to be shared.”

Eureka! Of course! Divvying up the spoils of war amongst my friends would be perfect. I spend a few bucks, I get something I like, and I get the enjoyment of giving folks gifts. With that in mind I signed up the next day and patiently waited for the box to ship. I was so excited with the possibilities of what could show up. The ads appeared on the side of my Facebook page, an animated scene from The Princess Bride, a great movie to be sure and I do love Cary Elwes, but was that something I looked forward to? Hmmm… Then the others, the artwork of miniatures from a Dungeons and Dragons campaign. That was more up my alley! What if I got some DnD minis again? Man that’d be fun. Let’s open this bad boy up and see what we got! 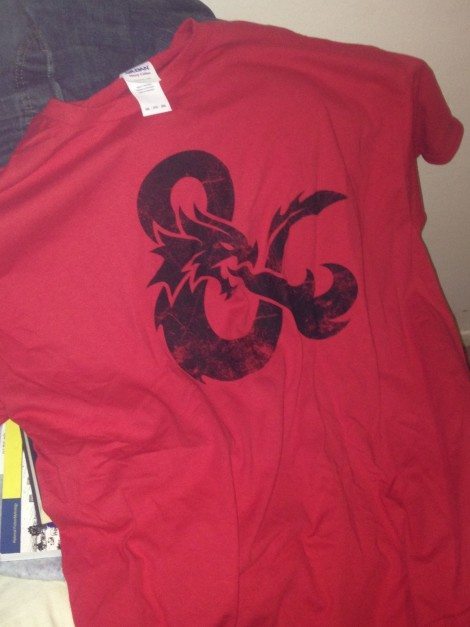 Red. This is pretty slick. The logo is the new 5th edition one and as far as logos go it’s a pretty rad one. Lately I haven’t been as up on the graphic tee game as I once was, I often find the stuff getting put out on the various shirt-sites to be a bit over cluttered. This though? Simple. I appreciate that in a shirt. 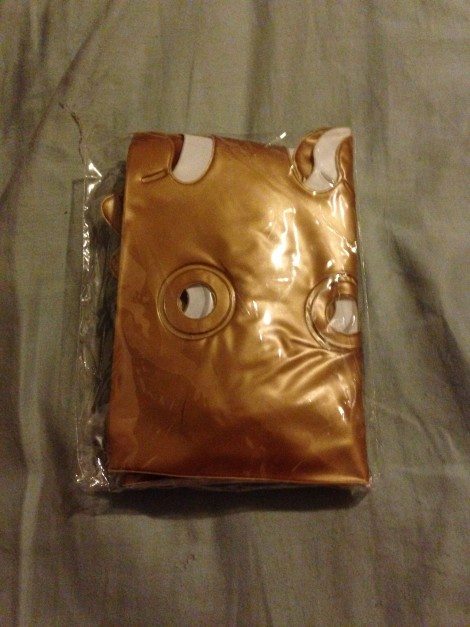 I don’t even know what to say. Always fun having more costume supplies I suppose? As odd a trinket as it is this will no doubt get use. Folks at work are constantly having birthdays, could be fun to have for that. 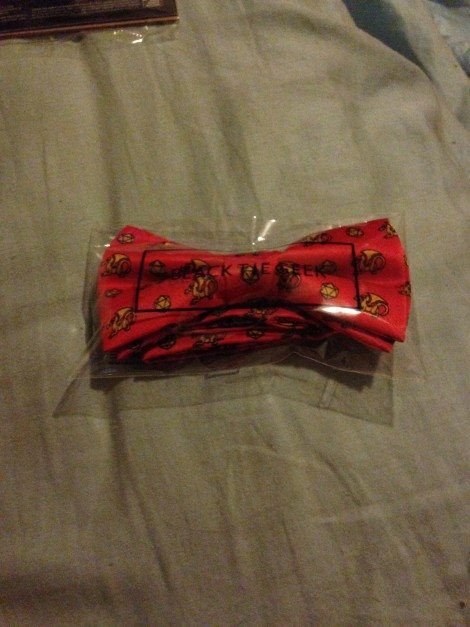 D20’s and dragons pattern. I’ll be honest. I don’t care what a space-faring, time-tripping alien might say. Bow ties ain’t the b’s and e’s. Maybe it works if you have the frame for it. I dunno. Regardless it ain’t me, but I am sure I can find a nice home for this fashion disaster. 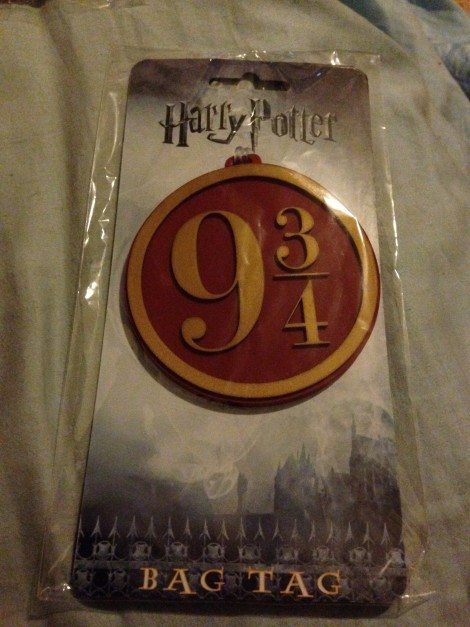 This big ol’ disc bearing the marks of 9 3/4 is neat. Unfortunately I don’t travel nearly enough to really make this worthwhile. Luckily however there are Potterheads everywhere and I’m sure one of them would be delighted to have it.

Sure enough we got something PB related! These cards have a plasticized coating making them resistant to tearing and stains. Since I’m not Gambit, I don’t go through playing cards too fast but it never hurts to have a second set, especially ones as nice as these. Maybe pair these with that Inflatable Crown for an amped-up version of King’s Cup. 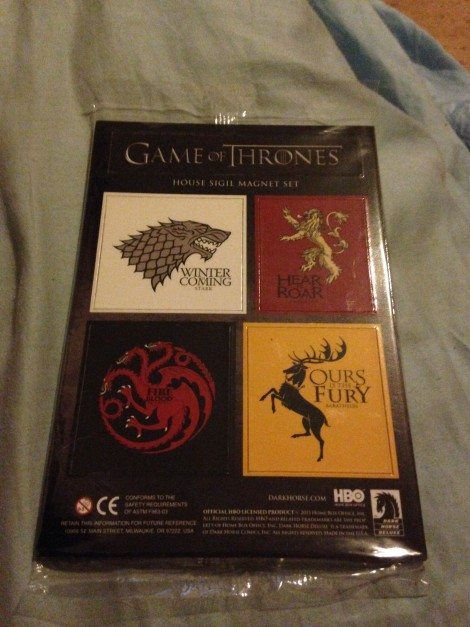 Magnets, how do they work? Or… Yeah! Bitch!! Magnets!!! Alright, quotes aside some House magnets. Useful? Totally. The House sigils of Stark, Lannister, Targaryen and Baratheon will keep my coupons safe! 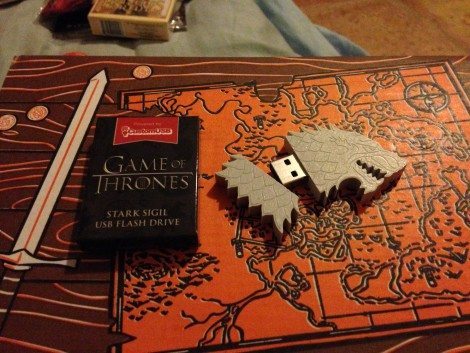 Damn. THIS is a thing of beauty. The Stark Direwolf holds up to 4GB of memory. Wish I had gotten this when I was still in school. Regardless, much like magnets, it is useful and won’t hurt to hang around on my desk until I need it. 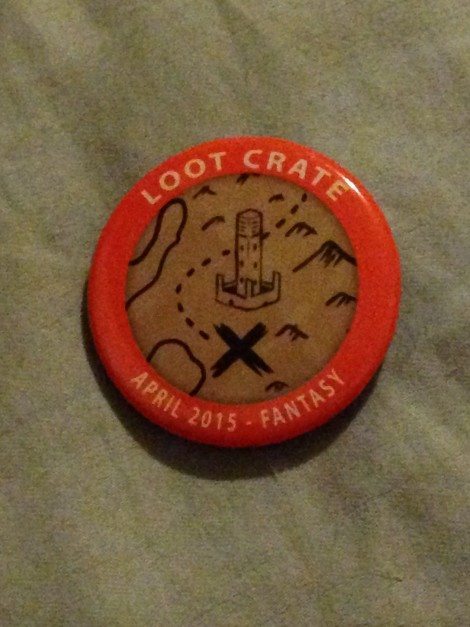 Those of you who have been picking these up in the past may be able to enlighten me here. It seems that every crate comes with a little collectible button in the theme of that month. I gotta say, I am surprised with how tickled I am by it! Between it and the cool reversible box, Loot Crate really knocked it outta the park when it came to personality!

All in all I am exceedingly pleased with this endeavor. I’m happy with everything I received and can’t wait to gift the spoils to friends. We all have enough stuff (I’m looking at you Vinyl figure collectors!), but spreading out a crate amongst friends makes the much coveted shelf-space footprint much smaller. I have already paid for May’s crate and look forward to it! If you’ve been on the fence about picking up one of these, Loot Crate or Nerdblock or Dorkbox or Dweebkeep or Pointdexterchest or what have you, I say give it a go with sharing in mind. It makes the experience a whole lot better.